Today’s rectangular castle is the result of construction works from the end of the 19th century. Tuscan columns support the enclosed balcony at the central axis of the main facade. The balcony is the only ornate part of the building. 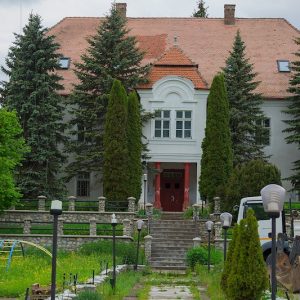 Towards the end of the 18th century, the Gál family from Hilib and the Kabos family from Magyargyerőmonostor both had properties in Nádas. It was at this time that Gál Anna of Hilib married Kabos János V, thus transferring the Gál property into the hands of the Kabos family. Their only daughter, Kabos Anna, married Lészai Lajos I (died 1857), and so the Lészai family became the owners of the estate. Today’s castle was once most probably the mansion of the Kabos family. We can deduce this from a contract from 1823, in which master mason Majer János was entrusted with the construction of the mansion.

There are two simple windows facing the park, with a plaster ornament composed of several stripes stretching above them, similarly to a lintel. The balcony is covered by elegant roofing with a segmented surface. This roof section is overshadowed, however, by the towering mansard roof behind it. The posterior facade is identical to the one in the front. The lateral facades are inornate, and their monotony is broken only by a few windows. At the beginning of the 20th century, its owners were Lészai Ferenc VI (1857-1920) and his wife, Bokros Ilma of Kiscétény (1868-1953). An inscription on the gravestone of their son, Ferenc VII (1913-1993), says that he was the “last lord of Kalotaszeg”.

During the Second World War, the estate was sold to the Filip family. Before its nationalisation, the last Filip-descendant moved to Germany, his daughters died, and the grandchildren did not request the return of the castle. Until 1989, the castle functioned as a store, medical cabinet, and orphanage. There are ongoing plans to renovate the castle, and move the Mayor’s Office into the building.