The wall of the main facade is symmetrical. The building’s courses and window frames are decorated with richly margined plasterwork, typical of the Szekler nobility’s houses from the beginning of the 20th century. The building’s main curiosity is the landscape wall painting with flower motifs decorating the interior walls and ceiling of the portico, framed with bamboo. 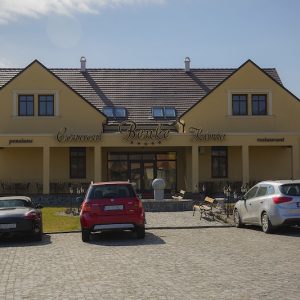 The last owner of Benke Manor was Benke László, who was deported to the Danube Delta in 1949. After that, the manor became a headquarter of the agricultural collective, and later a shelter for the seasonal agricultural workers. An owner then lived in one of its wings, while homeless people occupied its main section. The manor was not taken care of properly for a period of six decades. The prolonged neglect has resulted in the ruination of the building. The manor and its outhouses now function as a luxury hotel.