The manor was built with natural stone masonry and has a jerkin-head roof covered with tiles. A small air-shaft lies on the western gable wall, solution which resembles of that of the Saxon relative houses from the nearby region of Barcaság (Țara Bârsei). A cellar composed of a single room is extending under the manor. During the renovation, the rotted beam ceiling of the cellar was replaced with a modern structure. The porch, supported by rectangular pillars, placed at the south-eastern corner of the building was also rebuilt during renovation. The manor was renovated for the purpose of hosting guests. 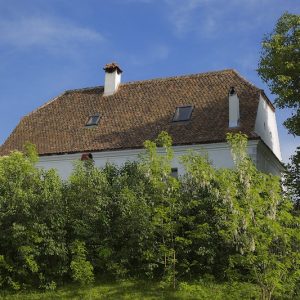