On the main square of Blaj stands the former Bagdi Castle, which since 1738 (with a small interruption in the 20th century) functions as the Greek Catholic Archbishop's Palace. The castle was built in 1534-1535 by György Bagdi, who designed a T-shaped residential tower with three floors. The entrance was reinforced with a fire-line. 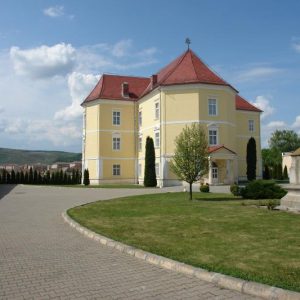 In 1617 the building was known as the hunting seat of Gábor Bethlen. The Prince of Transylvania reconditioned the castle and the church standing in the garden as well and in 1619 donated it to Simon Pécsi, Chancellor of Transylvania. The new owner started renovating the castle and repaired the nearly one hundred years old Protestant Church too. The inscription of a marble plaque right above the church doors is an excellent evidence for this: „Hic iter est, veniant sitientes bibere, lymhos, post quas non ultra concutit atra sitis. A.D. 1629” On December 14th, 1664 Anna Bornemissza, the wife of Mihály Apafi (Prince of Transylvania) moved into the castle. On October 27th 1687 a very important agreement had been signed in this building between the Habsburg Empire and the Transylvanian Parliament, pursuant to which Transylvania was officially attached to the Habsburg Empire. On this occasion Charles, Duke of Lorraine represented the emperor and Mihály Teleki, Chancellor represented the Transylvanian Assembly.

In 1737 Charles III donated the estate to the Greek Catholic Church and in the next year Inocentiu Micu Klein used the building as the bishop’s residence. Since then the castle had undergone various construction projects, in 1842 it was expanded with a north wing as well.