The construction of the castle located in the centre of Treznea was commissioned by lord Bay Ferenc in the middle of the 19th century. He and his family lived in the castle until 1944. They had moved to his wife’s native village, Curtuișeni, only a few weeks before the frontline of the Second World War engulfed Treznea. He had left Treznea for good, and because of that the villagers blamed him for the carnage that unfolded a few weeks later. 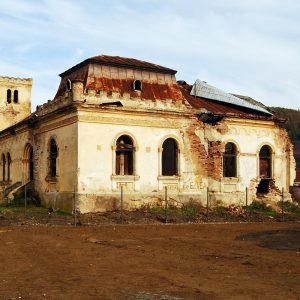 The castle had become one of the headquarters of the Agricultural Production Cooperative, and was subsequently looted after 1990. Its condition is worsening every day, and only its monument status is protecting it from the wrath of the villagers. Its demolition is forbidden, its conservation is too expensive, so people are simply waiting for it to collapse on its own. All this is happening despite the fact that Treznea holds one of the most unique buildings in the country. The two wings of the castle are connected by a passageway that was modeled after the Venetian Bridge of Sighs.