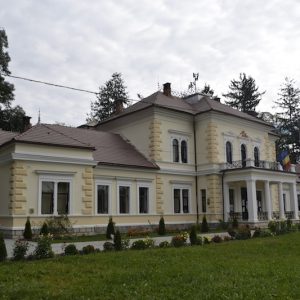 The elevation of the building’s central part and several of the decorative elements are also a result of these renovations. The building’s last nobiliary owner was Béldi László, the Lord-Lieutenant of Nagy-Küküllő County. At the end of the Second World War, the Béldi family sold the castle to a Romanian engineer named Barbu Pantazi, but the building was nationalised after only a few years. During communism, “pioneer camps” were organised for many years in the castle and its surrounding park, after which the local school functioned in the building for two years. After the end of communism, the castle was empty for two years, then became a post office, then the mayor’s office. Pantazi had no heirs, and so the building remains the property of the Mayor’s Office, which is now renovating the building. The office is already open on the ground floor, but the upper floor is not yet finished. The local government’s conference room is being established in the former ball room.

The open balcony from the upper floor is supported by six columns, and is surrounded by six small pillars and a wrought iron balustrade. Two ornate, round-arched windows and a door open at the balcony. The lintels of the windows are triangular on only one side of the building, the rest are straight. The gable above the balcony displays the double crest of the Béldi-Sigmond families, which alludes to the commissioners of the last construction works. The entrance and open balcony of the posterior facade are divided into three segments by two pairs of simple round columns placed at the centre. Slightly protruding risalits can be seen on the ends of the lateral wings on the two main facades. The sides of the two lateral wings are accentuated by pillared porches. The two porches are not identical. The corners of the avant-corps and the corners of the risalits on either side of the castle are decorated with quoining. The furniture has mostly been destroyed after the building’s nationalisation, but a few well-sculpted doors, the splendid wooden coffers from the ceilings and the fireplace of the main hall have remained intact.