The plaster decoration from the portico has preserved the initials of the castle’s founder and the year of its construction: G.B.I. 1751. The building is currently being renovated by Mikes Imre (1942) and his family. Zsigmond, his son, and his wife are moving into the gatehouse. Now that they have returned from Germany, the family intends to the use to the revendicated building for touristic purposes as well. 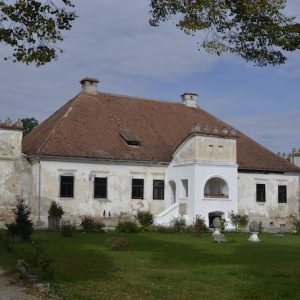 In 1982, the ownership of the castle was given to the ONT Carpați touristic institution, which had established pig farms on the Béldi, Mikes and Nemes estates. After the end of communism, Aro Palace Ltd. used the building as a warehouse. A T-shaped gatehouse with multiple floors is located at the entrance to the estate. A large, round-arched driveway was established at the meeting of the building’s two wings. Quadratic towers are joined to the building on either side of the symmetrical, rectangular building. A portico, similar to the two towers, protrudes from the central part of the main facade. The entrance to the castle’s “palace chamber” is located here. The portico and the two towers have crenellated tops. The layout of the rooms is the same in both wings, thus preserving the symmetry of the building in the interior as well. There are ten rooms in total, most of them with vaulted ceilings.