The ruined castle stands on the elevation of the river-flat. Its four corners are fortified by polygonal towers with arrow slits. The walls of the castle stand tall, but the roofing and interior walls have completely collapsed. The central building was once surrounded by a quadratic exterior wall at thirty meters distance. This wall was fortified by four diamond-shaped corner towers with arrow slits. These exterior walls have since disappeared and only the ruins of the two southern corner towers remain. 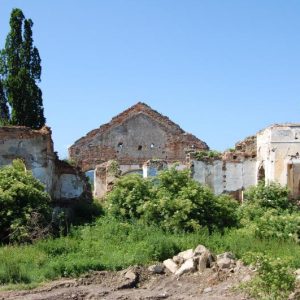 The arcaded main entrance from the south, the arcaded loggia above it, the defensive walls around the main building and the tower designed by Haller Gábor were all constructed during this time. After the Second World War, the castle became the property of an agricultural collective, and started to fall into ruin. During the rerouting of the river near the castle in the 20th century, a dam covered with concrete slabs was constructed 50 meters to the north of the castle, which averted the flow of the Târnava Mare/Nagy-Küküllő from the bed around the southern side of the castle. This part of the village was previously called Alsóbún.