We may learn about Lajos Bethlen's castle and its garden only from contemporary descriptions and drawings, because due to a series of destructions only the crypt, which used to be part of the garden can still be seen. 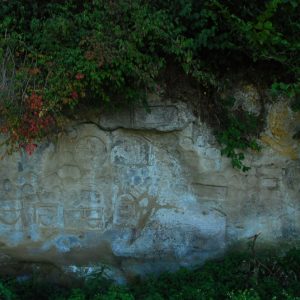 The castle and its annexes were built on the western side of Chiraleș on top of a hill. The main building was a single-storey built in Baroque style. The main façade of the castle was dominated by a tympanum placed on four columns. The main façade was enclosed by balusters, while the side façades were covered with statues and urns depicting heroes from the antique mythology. On its pediment there were three letters: "C [Omes] L [udovicus] B [ethlen]" and below the following inscription: "Delicias homini quales latura ministret / Prospice et exemplo gaudia misce meo". According to the descriptions of art historian József Bíró, once there was also a commemorative plaque with the inscription "Built and dedicated with friendship by Lajos Bethlen G. MDCCCXIII". According to other sources the castle was dated to 1808 (MDCCCVIII), but the date given by Bíró seems more valid.