The building became the property of the city at the end of the 19th century, and was the building of the County Hall for a while, before becoming a museum in 1934. The core of its collection is comprised of the previous collections of the Hunyad County Historical, Archaeological and Scientific Society. Important findings from Roman and Dacic archaeological sites were added to this collection during the 20th century. The building was restored between 1996 and 2006. 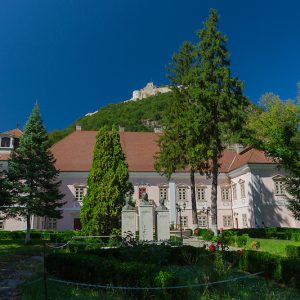 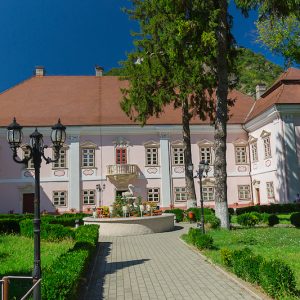 At the beginning of the 17th century, the Curia was inhabited by Széchy Mária, the “Venus of Murány”, who was the wife of Earl Bethlen István at the time. She later sold the castle to Prince Rákóczi György I. After the Habsburg takeover of Transylvania, the ownership of the estate changed a few times before the Curia finally became the property of Transylvanian Governor Haller János in 1743, who then proceeded to significantly extend the Curia. He added the defining features of the otherwise rectangular building, the “pavilions” at the corners of the two-storey building, the representative ornate staircase, the intricately carved balconies, the rococo window frames and the interior stucco decorations.

The building was once surrounded by a beautiful courtyard (complete with waterworks), a park and a garden, as well as several farm buildings, all of which very little remains today.