The old castle of Cetatea de Baltă was near the village in a swamped meadow which is the reason why the castle was called in Romanian "The Swamp Castle”. The ruins of the castle destroyed by the Mongol invasion were first mentioned in 1321. 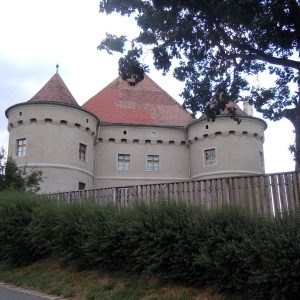 Mathias Rex gave the castle to Pongrácz János Transylvanian voivode. After his death in 1476 Ștefan cel Mare of Moldova recieved it. In 1507 Ștefan gave the castle to Bogdan, his son, but in 1538 Petru Rareș voivode, as a supporter of Ferdinand I lost the castle. As a result of the Transylvanian National Assembly in 1565 the castle was demolished. Bethlen István, the brother of Bethlen Gábor built the four-square castle that currently stands on the place of an old manor-house in 1622. After several owners, in 1758 Bethlen Gábor court chancellor bought the property from the Treasury. In 1764 through a change the castle got to Bethlen Miklós, Bethlen Gábor’s brother, who built a stairwell, demolished the outer walls and built a chapel, a stable and a gate-tower (fell in 1972). The memorial tablet with a bandy-legged cavalryman at the back of the building is dated in 1733. Earl Haller Jenő won the castle in 1884 playing cards with Bethlen Márk.

The walls of the castle were harmed in the battles from 1944. The castle served as a lathe, office and since the late ’70s the Jidvei champaign factory has used its spacious basements.

Property rights: The owner of Jidvei bought the castle in terms of renovationg it.