A few hundred meters from the village's protestant church, on a small patch of land rising above the confluence of the Mureș and Pianu creeks, stand the ruins of the renaissance Martinuzzi Castle. In its place once stood a monastery established in the 14th century by the Dominican Order. 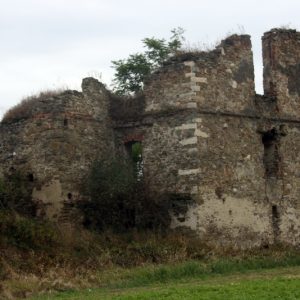 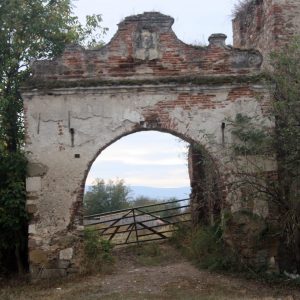 When the steward of Transylvania, bishop Martinuzzi György, received the region of Alvinc in 1546 as a royal gift, he immediately initiated the demolition of the monastery, and the construction of the castle, using materials partly obtained from the monastery’s demolition. According to the plans, the goal was to build a castle with a square-shaped blueprint, surrounded by a moat traversed by a drawbridge at the entrance, with corners reinforced by towers. During Martinuzzi's time, however, constructions were only partially finished, because Martinuzzi (Brother György) was assassinated on the 17th of December 1551 by the mercenaries of the Italian king Ferdinand. His body had been lying in the palace, frozen in blood for over two months, before it was finally discovered. He was only buried in March, 1552, in the Saint Michael church in Alba Iulia. At  the beginning of the 17th century, the castle became the property of suzerain Bethlen Gábor and his wife, Károlyi Zsuzsanna. The castle was rebuilt according to the plans of Giacomo Resti, under the supervision of Brassai Kőműves János, a master stonemason from Cluj-Napoca. After the large-scale constructions were finished, the result was a hexagonal renaissance castle even more beautiful than what Martinuzzi had envisaged. In the middle of the 17th century, the Tatar forces invading Transylvania attacked Vințu de jos as well. They occupied and burned down the castle, and destroyed the city. After the dissolution of the principality, Vințu de jos became the property of the royal treasury. In 1715, the castle and the territory attached to it were granted to the bishop of Transylvania. The construction of the baroque gate, bearing the crest of the bishop on its frontispiece, was ordered in 1733 by the bishop of that time, Sorger Gergely. In 1792, the castle burned down once more and was only partially rebuilt. In the 19th century, when the castle was still in a habitable condition - and by then the property of the Kemény family – the writer and publicist, Kemény Zsigmond (1814-1872) was born in it.

Halaváts Gyula wrote as follows about the castle's condition in 1906: „We step into the large courtyard through the renaissance gate, the top of which is ornate with the crest bearing the red hat. To the right of the gate is the L shaped two-storied castle ornate with towers, while the rest is surrounded by auxiliary buildings. On the side of the castle facing the courtyard, there are several imposing twin windows that are renaissance in taste. But in what state does this building, once worthy of respect find itself! The roof has been unfolded with time and rain pours in through several places, which has left the upper structural pillars to rot and the joists to break. The vaulting of the floor can also be seen to have caved in in more than one point. The doors and windows are long gone, the building is traversed freely by rain, wind and herds of pigs. At the moment of my writings, the castle of brother György belongs to the Gyulafehérvár chapter of the Roman Catholic Church. The castle is subletting by the spirits manufacturer of Alvinc and he is using this building of historical significance as a place to keep his pigs safe from the heat of the sun.”

In the 1930's, most of the buildings, as well as the southwestern tower, were demolished, and the material was used in other constructions. The parts still existing today are the following: the northern wing (with its roof caved in), the square turret and adjoining baroque gate next to the wing, a larger square turret at the northwestern corner, the remains of the staircase next to it, the ruins of the western corner-turret, as well as the two walls surrounding the courtyard from the northeastern and southeastern sides.