Brâncoveanu Castle from Sâmbăta de Sus was built at the end of the 18th century, on the site of a castle built in 1670, which deteriorated, therefore the ruler's grandson, Grigore Brâncoveanu, demolished the old building. 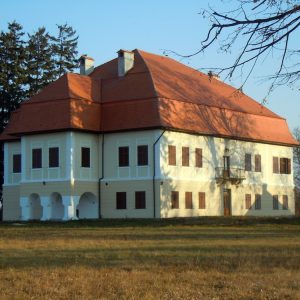 The Brâncoveanu family is one of the largest boyars family in Wallachia. Constantin Brâncoveanu, the builder of the castle from Sâmbăta de Sus, was Prince of Wallachia from 1688 until his death in 1714. During his reign, a new architectural style, which combines the Italian Renaissance with the Neo-Byzantine style, was spread. This new style was named after him, being entitled "Brâncovenesc Style". The village of Sâmbăta de Sus was a Romanian village located in the Făgăraş depression, which, on the one hand,was owned by Făgăraş Fortress and on the other hand by the noble families. In 1645, Preda Brâncoveanu bought the estate Sâmbăta de Sus. After him, the fortune passes on the name his grandson, Constantin Brâncoveanu, the Prince of Wallachia, who raised a monastery outside the village. Due to the implementation of the Land Reform Law from 1921, the castle became the property of the Ministry of Agriculture, and during the two World Wars the building was used as a creation center, a workshop. Later, it was used as a warehouse and the state of the building deteriorated. Between 2006 and 2011, the town hall together with a private company renovated the castle.
(Source:Bicsok Zoltán-Orbán Zsolt:”Cu voia lui Dumnezeu, construita-mi curtea...” - Istoria castelelor familiale din Transilvania] (With God's Will I Built My Court ..." - The History of Transylvanian Family Castles] Gutenberg Publishing House, 2012)