Here, on the most developed noble estate of the former Monarchy, in the settlement of Jimbolia, which registered a great development in the period between the end of the 18th century – the beginning of the 20th century, there are numerous valuable buildings that are still standing today. 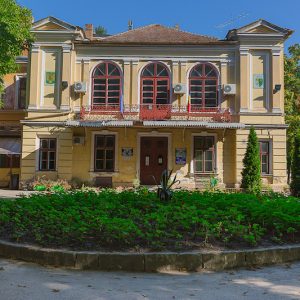 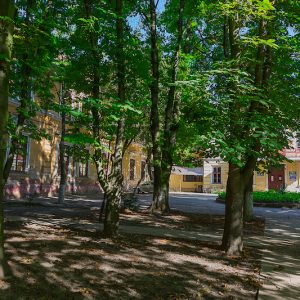 The buildings had several functions, besides residences, there were used for farming, industrial or religious purposes, were built out of different materials, had different architectural styles, yet they all created a whole, within which everything worked perfectly.” (SZILÁGYI Mária, Anica TUFEGDŽIĆ: Forgotten heritage – Csekonics family's built legacy, 2014.

In 1937, the former castle, planed by Ybl Miklós, because of economic difficulties was demolished by the Csekonics family. Csaba J. Fekete wrote about this original building: "Besides the main building of the castle of Jimbolia there were several outbuildings (kitchen, place for carriages & stalls). The main entrance of the castle was accessed from a driveway and a relatively narrow staircase led to the two-storey lobby of the ground floor. Near the main entrance a door lead to the butler room. From the lobby in the garden tract, in the direction of arrival one could see the dining room, next to it, the serving room and the Countess's grand salon. On the other side of the latter  was the suite of Cziráky Kostancia, next to which the  suite of the Count Csekonics Endre, which could be accessed also from the lobby. The two suites were parallel and not transversal, including an internal corridor between them. The Countess's suite was connected to the small boudoir for leading into the company rooms. As a continuance of the boudoir, there was the master bedroom, next to it the alcove-shaped bathroom and dressing room (toilette); a concealed design of a closette ; Then the series of rooms were closed by the children's room. The latter two rooms could be accessed also from the server corridor. In the count's suite, after the aforementioned Count Salon, there was a writing room from which a hallway led to the bedroom of  Csekonics Endre. A small closet room was opened from the hallway. The Count's bedroom was connected to the butler's room and the internal server corridor. From the inner server corridor, the chamber room opened in the continuation of the women's suite, faced with a coffee-kitchen and having behind the wardrobe room (garderobe). The closet compartment opened from the corridor could be used by the staff. The access to the upper floor was made trough the side-staircase leaving from this server corridor, as well through the small staircase opening from the lobby. "(Csaba J. Fekete: A THOUGHT, TWO CASTLE: ZSOMBOLYA-CSITÓ, Ó-KÍGYÓS)