The construction of the castle was commissioned by Zichy Domokos, bishop of Roznyó (Rožňava in Slovakian), later of Veszprém, and was finished in 1860. This was after he was struck by the grief of losing his brother Ödön (1809-1848), who was executed for treason. After the circumstances of the political scene forced him to renounce his position, he moved to Transylvania. He died in 1879. The castle has remained in good conditions to this day. 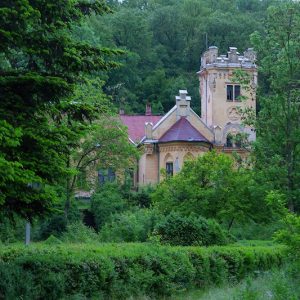 The castle was transformed into a hunting lodge in 1904 by Zichy Ödön (1874-1967), who was the grandson of Domokos’s other younger brother, Zichy Edmund (1811-1894), one of the founders of the Museum of Applied Arts in Vienna. In 1907, Ödön married Bethlen Gabriella, a descendant of Bethlen Farkas, chancellor of Transylvania. After WWI, they are forced to sell the estate in 1918. The new owner was the Wallachian boyar Gheorghe Mateescu, an investor in petrol extraction, who became popular among the villagers quite quickly. He constructed a school, gave land for the construction of a church, and even made sure that there were always gifts under the village’s common christmas tree. It is thanks to his efforts that the castle’s interiors remained in good condition. It’s original furniture and Great Hall remained until 1947. One of Mateescu’s sons died of leukemia, the other died shortly after returning home from imprisonment in Siberia. Mateescu himself died in 1952. After the castle’s nationalization, the building was emptied, the furniture looted, and in 1950 it became a preventorium that functioned until 2006. The family’s emblem can still be seen on the exterior walls.

An ornate multi-storey tower can be seen on the right side of the castle.  The year 1904 is inscripted above the entrance to the tower’s spiral staircase. The castle is surrounded by a beautiful park. The boyar’s fortune was inherited by his second wife, who, in turn, left the huge fortune to her nephew. But the estate is contested among the boyar’s family. In 2012 it was still not decided who inherits how much.