The construction of the three-story, eclectic aristocratic castle was commissioned by Károlyi Tibor and Dégenfeld-Schönburg Emma in 1896. The castle originally had a gable roof, but was later rebuilt in romantic style in 1914. 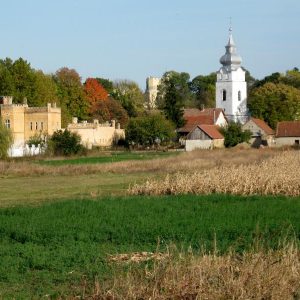 The castle was inherited by their son, count Károlyi Imre, who had left the country after 1918, then reclaimed the property in the name of the Károlyi family. The castle and its territory were nationalised in 1947 and repurposed to function as a grain silo, later as a sanatorium. The oil-extraction enterprise from Suplacu de Barcău has transformed the castle into a resort after 1980, utilising the thermal waters found in the park.After the revolution the castle gained a new owner, but started falling into decay due to the discontinuation of renovations.

The two stairways situated on the main building's two sides have a lacy bastion-like aspect and a tower one floor above the main building. Windows with rectangular frames are placed in pairs along the western facade with straight eyebrows projected above them, the lower two levels are covered with tin, while the third floor windows come with cantilevered window sills. The foundation is made of rubblestone, the first floor is separated by the other floors with a broad string-course. A row of blind arches is situated under the cornice while the roof serves as a balcony with a laced balustrade. Along the axis of the main ledge there is a strongly protruding median risalit, while above the main entrance to the left there is a two-level risalit jutting out in a bastion-like fashion. The staircase on the left side has a separate  entrance with a lancet eyebrow. Beneath the cornice’s parapet are three clocks along the sides of the turret. The right side wing has two floors, while the back facade has four floors. The huge dining hall, the salon, the hunting hall and the count's study are all situated on the ground floor. A spiral staircase leads to the second floor. The bedchambers were located on the first floor, while the teacher’s room, as well as study rooms were on the second floor. The building's interior has since been restructured. The main entrance is situated in front of the frontispiece, in the middle of the castle's large arboretum.

The castle is now the property of Petrom.