The new fortification’s purpose was to take the nearby Bálványos medieval fortress' role which the treasury abandoned. The first mention of the fortress of Gherla dates back to 1539. The designer and builder of the castle most likely was the Italian architect Domenico da Bologna, who was at Gherla in 1540. 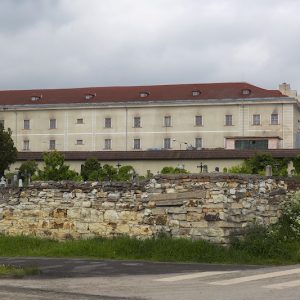 Until the death of György Bishop the bastion was raised, the northwestern stronghold and palace was attached to the west wall. The first mention of the large hall on the first floor of the palace is dated to 1553. In the period from 1551 to 1556, when Transylvania was under Habsburg ruling, King Ferdinand I (1526-1564) donated the Gherla fort to governors and rulers who succeeded in the administration of Transylvania, provided they continue to garrison the fort. The fortress of Gherla had the most modern and safe fortification of that epoch. It was ruled first by General Castaldo, then by Prince Andrew Bathory, Stephen Dobó and Francis Kendy. The greatest evidence of the safety of its fortification is that Cardinal George Martinuzzi kept it’s fabulous treasure on the premises. The treasure that was subject to several disputes after the Cardinal’s death.

In 1556 came the first siege, whose defender was Stephen Dobó, after the recall of Transylvanian Queen Isabella and John Sigismund. After five months of resistance, Dobó surrendered the fort in November 1556. It seems that even before 1565, the fortress was expanded westward: they built a new western wall flanked by two semi-bastions and a new gate and bastion northwest across the Zwinger ditch (space between two walls bordered by a wall of defense in front of it) surrounding the enclosure on three sides.

The construction works were carried out during the reign of John Sigismund (1556-1571) and then the reign of Báthory. Christopher Báthory († 1581) probably built the tower ladder in front of the Martinuzzi palace facade. Today this tower is no longer visible. On 13 September 1594 inside the fort, Sigismund Báthory (1588-1602, with interruptions) executed Baltazar Báthory captain of the army, and Chancellor Francis Kovacsóczy, for allegedly siding with the Turks. During the reign of Gabriel Bethlen, the construction works have continued. The fortification of Gherla was repaired. They decorated the palace rooms and under the direction of Italian architect Giovanni Landi, the bastion defending Ciunt outside the west gate was reconstructed. Two commemorative plates were put up as a reminder of the works, but they have disappeared in the meantime. Significant constructions were made during the reign of Prince George Rákóczi II (1648-1659): based on a commemorative plate bearing the inscription of 1653, the mid-century palace building was built with floor that attached to the western wall outside of the fort. The works were executed under the direction of Italian architect Agostino Serena. In the late seventeenth century the fortification’s military role decreased and the payment of tax to Turkish prince Apafi I (1661-1690) alienated the majority of property.

In 1687, in the context of the Treaty of Blaj, control of the fortress was taken over by the imperial forces. Until the fort has not turned into a prison, it remained in the possession of Gherla for nearly a century, except for a short period, during the reign of Prince George Rákóczi II (1704-1711). At the beginning of the eighteenth century the defense of Gherla had to overcome much of the evolution of military technology, which is why after the defeat at Jibou, Francis II Rákóczi has not dared to face a possible enemy attack in this fortress. Austrian authorities have tried to modernize the fortification by setting up advanced lines of defense. Therefore, construction in the eighteenth century primarily aimed at the development, maintenance and regular update of these works. In 1786, following Emperor Joseph II (1780-1790) the fort’s military role was suspended and the site was set up as a regional penitentiary. Initially, the new institution’s functions were performed by the old fort ramparts, the two palaces that lined the sides of buildings belonging to the city court. It has acquired its current Renaissance Ensemble aspect only in the second half of the nineteenth century: the bastion was demolished northwest across the ditch, the outer gate was incorporated into the new building to the management; They also demolished the eastern bastion’s enclosure and smaller buildings in the inner courtyard of the fortress. In place of the latter, between 1857 and 1860 a new prison building with three floors was built. In accordance with the aspirations of urban planning the water moat was drained and turned into a park. In the same period before 1898 they built smaller buildings outside the former ditch.

According to the assembly of reports made in the eighteenth and nineteenth centuries, the fortress presents an almost regular quadrilateral plan. Straight walls of the city were defended by a bastion on three corners, a semibastion in the northwest corner and another bastion, built beyond the moat of the fortress. Among them only the semibastion was partially preserved. Protected by the bastion fortification in the courtyard the Renaissance palace was raised, which was preserved until today. The southwestern part of the fort has been extended with a semibastion and a gate tower. Still, the gate towers have not survived. Rákóczi Palace, named after Prince George Rákóczi II, located in the outer courtyard of the fortress rests on the western wall. This palace was completed in 1653 and was built in four axes. Later, a Zwinger was built, which surrounded the fort on three sides, but it was not kept. The ensemble was surrounded by a moat of water - the dry ditch is visible today. Access inside the assembly is on the south side. The modern prison gate is flanked by two Renaissance reliefs. Around 1540, a secondary relief was located here representing a rampant lion with a shield that keeps King John Zápolya, the rampant wolf. Beyond the prison gate, crossing the high bridge over the old moat, you can reach the outer gate of the fortress. In the left gate, there is an inscribed plaque placed in memory of the captains of the fort in times of Hungarian kings Ferdinand V (1835-1848) and Francis Joseph I (1848-1916). Above it is a commemorative tin, made in 1540, by order of the bishop. During the eighteenth and nineteenth centuries, the palace with three levels was expanded westward. Opposite the Rákóczy palace there is the Martinuzzi palace. The building with three levels with a rectangular shape is flanked at the southern gate of the inner city, and at the northern end of the polygonal apse of the chapel. The visitors are greeted by a beautiful gate, carved in Renaissance style.

The gate is flanked by pilasters with a semicircular arc grooves, lifted on high pedestals. The cornice was engraved with the Latin motto: DOMINVS ADIVTOR ET PROTECTOR QVEM TIMEBO (God is my protector and I fear him). The pedestrian gate opening is located above an inscribed plaque, as evidenced by the coat of arms of Martinuzzi - the image of a raven, marked by the Pauline Order in Hungary, and that of a prancing licorn belonging to the Utjesenich family. The shield is crowned by a epimedium. The inscription of the year 1542 under the Bishop’s blazon emphasizes loyalty to King John I and sacrifices construction materials taken from the fort. In the western façade of the palace there is a simple row of 19th century windows (8 downstairs, 10 upstairs) which illuminate the corridors built subsequently built by Martinuzzi. Upstairs there are two similar windows and this area of ​​the façade is crowned by a romantic attic. The eastern façade of the palace has 9 axes with Renaissance windows and frames. The central axis of the ground floor is the main entrance of the palace, which is preceded by a modern porch. In time the principality housed officials on the ground floor and two rooms upstairs were appointed as the representative and episcopal residence. The great hall on the ground floor, the former food warehouse keeps the original cross vaults, which rest on a massive central pillar and the side walls of the room. Reconstitution of the original subdivision of the palace is hampered by changes undertaken in the nineteenth century, particularly by arranging an interior stairway in the central axis of the building.

The corners of the polygonal chapel are decorated with three tall windows with Renaissance borders. Inside, the sanctuary is divided into three segments which are covered with a semi-dome supported by pillars. The space below the western gallery was covered with cross vaults on the warheads. In 1822, the painter from Verona, Peter Rivett decorated the chapel with frescoes while being held there as a prisoner. These frescoes have been destroyed. After 1989, the chapel was decorated with Neobyzantine paintings. Opposite the palace is the Martinuzzi prison building with three floors, built in the nineteenth century with a "U" shaped plan. Its main facade is a simple rhythm of windows without frames with basket-shaped handles. The central area of ​​the facade is highlighted by the attic, which is adorned by a clock and above it, with the inscription of 1859.

According to our research, the Gherla fortress in Transylvania is the first example of Italian Renaissance military architecture. Domenico da Bologna, the alleged planner of the fortress, was probably inspired by fortified bastions built or designed in Italy in the first three decades of the sixteenth century.

Today the assembly is used as a prison. Visiting is being limited.