The original royal castle was built by Forray András in the 1830's using a hunting lodge originating from around 1680. After several devastations, the castle received a classical exterior look in the 19th century when it was the property of count Hunyady. 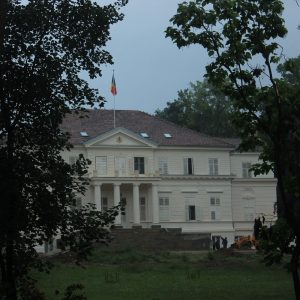 After the death of count Hunyady Károly, the castle was bought by the Mocioni family, which had close relations with the Romanian royal family. It was then obtained by Michael I., who began restorations of the castle until he was forced out of the country and the castle was nationalized in 1945. In the 1980s the castle belonged to Nicolae Ceaușescu; in 2001, King Michael I. regained possession of the castle from the state. He opened the castle for visitation in 2005.

350 year-old oaks and 170 year-old walnuts and yews can be found in the park of the castle.