In the period between the two World Wars, the estate was bought by the Ugrai family, which still owns the estate. The construction year of the smaller, mansion-like noble edifice, owned by Haller family, is not yet known, but it is likely to be more recent than the nearby castle with corner turrets. According to tradition, it was built by Bethlen Kata, therefore its construction is estimated to the beginning of the 18th century, but neither the autobiography, nor the correspondence, contains no traces of such construction works. According to postcards, hundred year ago, the facade facing the park had a porch, without a trace today. In 2009 the castle was returned to Haller László, who sold it to the local government. Today the building functions as a school. 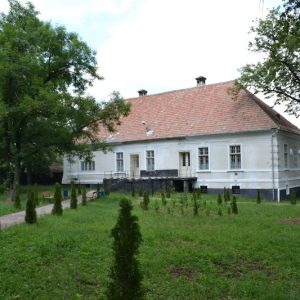 In the middle of the 17th century, the estate of Hoghiz, in unknown circumstances became the property of the Treasury, although for a long time it was owned by Sükösd. In 1667, the Hungarian Prince of Transylvania, I. Apafi Mihály, has donated the estate to Borsai Nagy Tamás. As Borsai's daughter, Borbála, married Bethlen (I.) Sámuel (1663-1708) in 1684, the estate passed to the Bethlen family. Once widowed in 1708, Borsai Nagy Borbála became the wife of Haller (III.) István, President of the Gubernium, but in 1701 her new husband deceased. In 1716 the estate of Hoghiz became the property of countess Bethlen Kata (1700-1759). This was the countess's favorite place in the coming decades.