The construction of the first castle here was commissioned by Alárdi Ferenc in the 16th century. In 1575, the armies of Báthori István, suzerain of Transylvania, caused serious damage to the castle. In 1610, the Haller family, originating from Nürnberg, commissioned the construction of a new castle, made from the stones of the ruins already laying there. The castle, commissioned to be constructed by Haller István, was eventually finished by his son, János, in 1674. This building was destroyed during the Rákóczi-revolution. 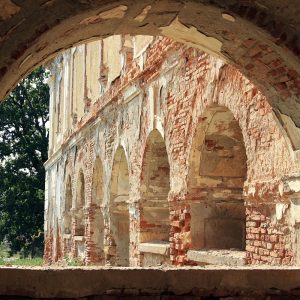 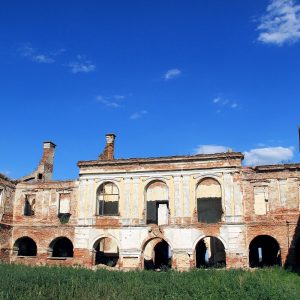 The baroque structure with a U-shaped layout, the ruins of which can be seen today, was raised by Haller Gábor in 1760. The style is very similar to that of the Grassalkovich Castle in Gödöllő. This can be explained by the close connection between the two families. A row of arches stretches along the facade facing the courtyard. The most emphasised feature of the building is along the centre of the building's axis, similar to a pavilion. This was once covered by a spectacular baroque roof, and the whole part was accentuated by a risalit on three axes. The castle was once surrounded by a sumptuous french garden consisting of smaller gardens, small houses, stone tables and ponds.

The Haller family owned the estate up to 1945, when the communist powers took over. Following the deportation of the owners, the castle served as a place for apartments, schools and storage units. Its interiors – furniture, expensive carpets, pieces of fine art – went missing or got destroyed. Eventually, all maintenance of the building stopped and anything of value got stolen. Every wooden part, be it it pillar, door frame or parquet ended up being used up as firewood; the tiles from the roof were stolen, the stoves destroyed. The park has decayed into an unrecognisable state.

Property status: after the changes of 1989 and a decade-long lawsuit, the inheritors of the Haller family: Haller Ilona and her husband, regained the ancestral castle and eventually donated it to the Roman-Catholic Archdiocese of Alba Iulia/Gyulafehérvár.