The first fortification on the location of today’s building was constructed under the rule of Róbert Károly, when the King moved his seat to Temesvár. In 1856, the castle saw its largest reparation works yet. In that year, the building was radically modified, the northern wing, the northern end of the western wing and the north-eastern corner all gained a historicising aspect. 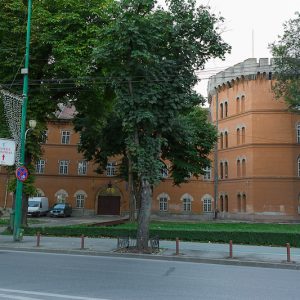 The north-eastern polygonal tower was adapted to the romantic northern facade during this time as well. The northern wing was extended with a tract towards the courtyard; the windows redefined the facades through their new distribution; the interior layout of the building and the vaulting was modified as well. Large construction works took place around the castle once more in 1902-1903; even an archeological excavation took place at the northern side of the estate during this time. After decades of preparation, the building was transformed into a museum during the 1950’s, and until the beginning of the recent resoration works, the interior layout of the castle and the functions of the rooms reflected the tastes and values of the period in which the castle was renovated, and its function redefined.

The building’s main visual attraction is the northern facade which was reshaped in the 19th century. Round-arched double windows, with lancet-arched eyebrow lintels are placed from on end of the ground floor to the other, along a 2+3+1+3+2 distribution of axes. The main entrance is adjusted to the windows and is located at the central axis, flanked by two wooden pillars. Two-storey tall, strongly historicising round-arched windows with lancet-arched plaster frames, divided at the middle and decorated with metal tracery are placed on the upper floor along the 2+7+2 axes. The castle’s current aspect is very diverse, and it reflects very well the modifications from the different ages, with different architectural styles at play. There is very little research of the castle compared to its historical significance, and archeological excavations were performed only in very limited fashions, when construction works created an opportunity, for example.