Baron Huszár Károly III modified the castle to some extent during the last few decades of the 19th century. The romantic elements of the castle, among which the historicising window from the stairwell, and the eclectic waterworks decorating the castle’s courtyard, were added during this time. 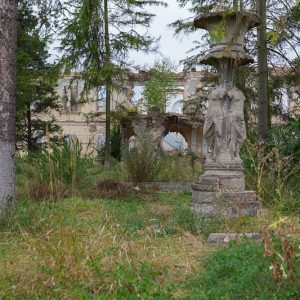 The joinery of the painted, coffered ceiling of the great hall from the upper floor serves to laud the handicraft of the castle’s lord. The representative fireplace decorating the anteroom was probably added at the end of the century as well. There were 32 rooms in the castle: the guest rooms, the library, the great hall, the chapel and the dining room were on the upper floor, while the family’s quarters, the tutors’ quarters and the Komornyik family’s residence was on the ground floor. A heavily reconstructed, multi-storeyed baroque building and a vaulted stable are situated next to the castle. Both of these were most likely the contributions of Huszár Boér József from the 18th century.

Three lakes complete with islands, swans, grots, exotic plants, waterworks and statues once beautified the 30 acre park surrounding the castle. The family even had a plant-house between the two World Wars. After the estate’s nationalisation, the park’s valuable trees became firewood, the castle and its outhouses housed offices of the agricultural collective, and a special school for disabled children. The family has regained ownership of the estate and wishes to restore the castle.