The expertly restored castle is a beautiful, U-shaped, one-storey building, the only exception being the connecting wing section, which is taller and has an upper floor. A pillared, glassed-in veranda, complete with parapet protrudes from the facade facing the courtyard. 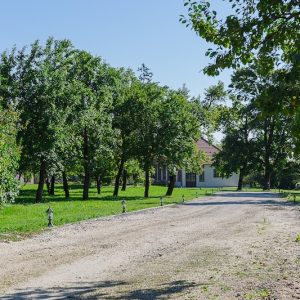 Baron Jósika Andor (1851-1900) was both born and died in this castle. His second son, Baron Jósika Gábor VI (1878-1945) inherited the castle from him. He was the owner when, during garden works in 1912, a burial site was accidentally stumbled upon. Pósta Béla arrived from the Kolozsvár Museum, and found 57 graves during the archaeological excavation. In other words, the excavation revealed one of the most significant cemeteries from the period of the Hungarian Conquest. After its nationalisation, the building served as a school, and later as the local council’s building. After the fall of the communist regime, ownership of the castle was restored to the inheritor of Baron Jósika Miklós V (1897-1973); it is thus the property of Bánffy-Jósika Imre in present days.

The glassed-in veranda illuminates the three wings of the castle through the large areas of glass. The most accentuated part of the facade facing the castle’s park is the triaxial gallery, supported by two pillars and two semi-pillars, topped off with a sculpted stone parapet. Two large, semi-circle arched windows and a jack arched double door open from the castle to the tornac. There was once a double crest, held by two lions and complete with a seven-pointed baronial crown above the main entrance. Two quadraxial building segments are attached to entrance hall. The rectangular windows of the two building segments are made distinct by the ornamental plaster-work on their frames. There are six small turrets at the top of the building fitted with wind-vanes bearing the monogram of Bánffy-Jósika. A splendid staircase leads from the castle to the park, the walkways of which have been restored in the last few years.