In the place of the castle we see today stood a stone house in the beginning of the 16th century. We know this from the last will and testament of Kálnoky Bálint (1599), according to which he had built the lordly house together with his wife, Petki Anna. The house quickly fell into ruin after the attack of voivode Mihai. The building was probably never renovated, as in 1646 Kálnoky István III. mentions in his writings the ruins of a house surrounded be a stone fence. 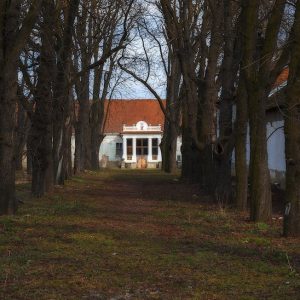 After several Tatar incursions between 1658 and 1661, the fate of the house was sealed. The reconstruction and extension is the merit of the son of the diarist, Kálnoky Sámuel I. He was building in Valea Crișului at the turn of the 1670's. According to Orbán Balázs, the castle that is integrated into the structure of the settlement can be considered the third place of residence of the Kálnoky family. According to the documents of the time, a chapel that served as the burial place for the family once belonged to the castle. The entries of the Domus História, kept at the Catholic Congregation of Valea Crișului, place the construction at 1416. This part of the building gradually fell into ruin and was eventually demolished at the end of the 19th century, while its late gothic-style sculpted doorframe was integrated into the crypt of the Kálnoky family (found in the Roman-Catholic cemetery) in 1889. The walls surrounding the castle were demolished during the 18th century and the materials gained were used in the construction of a castle with a square layout and an interior courtyard thanks to the efforts of count Kálnoky Antal I (1707-1783). The maintanance of the lordly house ceased towards the end of the 18th century and it was demolished in the middle of the 19th century. The chapel also lost its function not long after, and its inscripted stone frame found a new place in the crypt. The 19th century brought spectacular new reconstructions. Around the middle of the century, during the rules of count Kálnoky Pál (1814-1881) and count Kálnoky Félix (1824-1889), part of the ruined buildings were demolished, others were reconstructed, renovated. The western wing and chapel were demolished. The northern wing was partly reconstructed in the latter's place, thus giving the castle a U shape. Today's frontispiece was most likely created during the last few decades of the 19th century, when the eastern front received two new thin parts.

According to 18th century writings, the castle was once surrounded by a beautiful park with centenary trees, flower houses, fishponds, fountains and alleys. After its nationalization, the castle fell into ruin. Almost all of the interior features disappeared and the rooms of the northern wing underwent massive reconstructions with a mill being built in one part. The rooms were later used as offices, storage units and workshops. The state of the building gradually got worse, the facade was destroyed and only a few spots of the garden and park are recognizable. A veranda also existed on the eastern side, built in a classic style with pillars and a triangular pediment. A barbican, surrounded by fortifying walls, once towered over the entrance of the two-story, late renaissance castle with an L-shaped layout, beams carved in an embroidery style, painted board ceiling and glazed tile stoves. The parts of the building reconstructed and extended by Kálnoky Sámual were further extended in the 18th century. Benkő József already mentions the family residence as a „castle-like” structure in his work entitled Transsilvania speciális. Once the auxiliary buildings on the southern side were extended and the massive walls of the eastern side were constructed in the 18th century, the building ensemble became square-shaped. The western building with the barbican also served defense purposes. The 18th century constructions were ordered by Kálnoky Antal.

Research of the castle began once the Kálnoky family regained possession of the estate in the 1990's. The castle is currently being renovated.