The remains of the south-eastern tower includes data, which can be completed upon the 18th century engravings. The castle contains three two-story wings. The western side was closed by a section of wall. The towers from the southern part were three-story buildings and they were defined by baroque styles. The towers of the northern side had similar designs, but were a storey smaller. 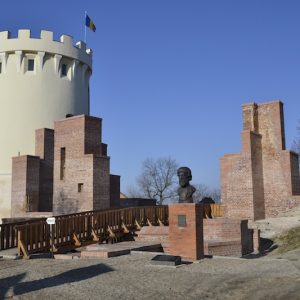 On the southern side, above the tower, there was a fifth round tower, which has three storeys. The towers were decorated by avant-corps and above the third level, there were oval windows. In front of the entrance of the cellar there was a narrower vaulted tunnel, which is completely ruined today, but it was said that it was connected to the Castle of Carei, the Chains Church of Satu Mare and the Reformed Church from Arcuș. The renovation of the castle is recorded in one of the books of Szirmai Antal. After the death of Károlyi Sándor, the castle was not left to the use of its owners, but some wings were used for the Lordship's purposes. At the end of the 19th century, the castle was laying again in ruins. The Petőfi cult of the settlement brought the building's partial restoration, when the south-western tower was reconstructed in a romantic style. The building, which remained without a function and the tower, renovated at the end of the 19th century, was still gradually deteriorating. The remains visible today are the remains of the reconstruction made in the period of Károly and at the end of the 19th century. The construction is surrounded by a deep dry moat. The outer part of moat located at the eastern and western side of the building was made of a raised ditch. The raised ditch from the western part was destroyed by today's asphalt road, the one from the north is still partially standing. The building has an irregular square ground plan, with approx. 30 m side length, with rounded towers at corners. The south-western tower, standing up to the crenellation, was renovated in the 19th century, the south-eastern is standing in ruins, being visible up to the first level, and the other towers location can be determined by the inequalities observed on the surface. The south-western tower was decorated with roamtic-style crenellation and its windows were shaped in Romanian style. At the Millennium Commemoration, the castle got a chapel on the site where the Hungarian poet Petőfi Sándor and Szendrei Júlia married in 1847.