In 1894, Earl Károlyi István modified the castle once more, according to the plans of Ybl Miklós; it became neogothic-neobaroque knight’s castle with seven towers, surrounded by a wide ditch. The modifications were overseen by Meining Arthur, an architect from Budapest. 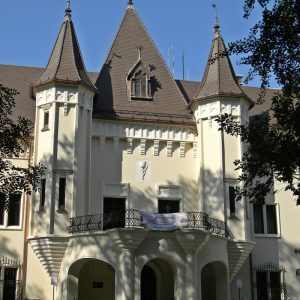 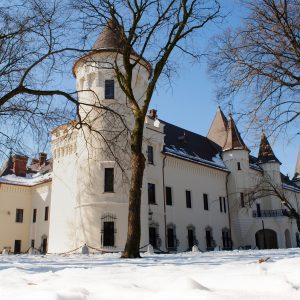 The construction of the preceding castle, in place of the one we see today, was begun in 1482, when King Mátyás gave his permission for the construction of a stone house. In 1592, Károlyi Mihály reinforced the rectangular building during the period of intense Turkish incursions. The stone building – which also played the role of a border fortress during this time – was fitted with towers, arrow slits, interior courtyard, as well as exterior walls surrounded by a moat and an exterior palistrade. In 1699, Baron Károlyi Sándor commissioned the reconstruction of the castle into a more ornate shape. In 1794, Earl Károlyi József demolished the old castle and commissioned the construction of a new castle, in baroque style, according to the plans of Joseph Bitthauser. During the construction of the new castle, the defensive elements were abandoned and the interior spaces were reshaped to fit the needs of the residents. The four-storey building had a triangle-shaped layout, decorative towers, covered interior courtyard and a domed cellar. Its large reception hall held many paintings and statues.

The castle’s doorway leads to an ante-room which, in turn, leads to a large atrium, which is a remnant of the old rectangular courtyard, the dimensions of which were kept, but was modified to become the new atrium. It was said of its size that “a coach-and-four could easily turn around inside”. A stairway leads to the upper floor, and part of the open archway, which leads to the upper rooms, also remains. Three large lancet-arched windows illuminate the imposing atrium from one of its walls. Its ceiling is beautified by Hungarian-style wainscoting with tulip motifs. The stairway is placed on two red marble pillars, the handrail of the stairs and corridor are composed of carefully turned spindled legs, placed in a row. The two Italian marble fireplaces are ornate with the lions from the family’s crest. The hearth is made of mosaic. After the modifications from 1894, new English-style wooden furniture was added to the rooms. The furniture’s woodwork was done by a local carpenter called Kinczel, while the metalwork was done by Ősz János, a locksmith from Nagykároly. The construction works of the castle are listed chronologically on a black marble plaque, which was installed during Károlyi István’s time on one of the walls. Today the building is eclectic and secessionist in style, its value also being raised by the 18th century elements.

The castle’s park is first mentioned in writing in 1754, as a “beautiful and famous garden of the court”, together with the park’s “tortoise-lake”. At that time there were also Venetian-style stone benches and massive flowerpots in the park, as well as a vintage Venetian fountain in one corner of the park. Szirmay Antal wrote the following about the castle’s park: “to the West of the castle there is a splendid garden arranged according to English taste”. The 12 hectare park contains several botanic rarities. Of the trees, a sycamore planted in 1810 by Earl Károlyi György, aged 7, is considered to be the oldest. At the edge of the park stands a 33 meter tall Romantic-style water tower, built in 1888, in place of which once stood a famous beer house.

Property status: a museum and a library now function in the castle.