The arcaded, triaxial entrance portico, protruding from the avant-corps, is one of the splendid examples of Transylvanian baroque architecture. The family’s extended crest is located in the middle of wavy gable that ends with a tympanum. 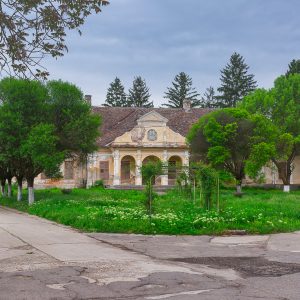 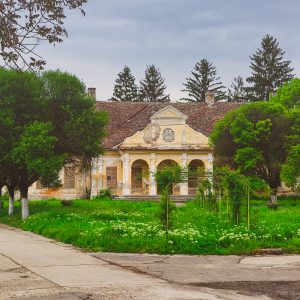 The building has four axes on either side of the portico, and segmented eyebrow arch lintels are placed above the shuttered windows. The windows and the arcades of the portico are separated by pilasters with Corinthian capitals. The corners of the avant-corps are also ornate with similar elements. After the First World War, Baron Kemény Árpád II (1867-1941), who was once the lord-lieutenant of Alsó-Fehér County, kept the user rights of the castle and the park, but gave the property rights to the Bethlen Gábor College from Nagyenyed. Following that, the Agricultural and Viticultural Vocational School began its existence in 1922, and the property rights granted by the Baron played an important role. Between the two world wars, an important centre of Transylvanian Hungarian agricultural teaching was developed here. The college constructed a new facility as well in 1935, but it was all nationalised in 1948.

In the past years the castle has stood empty for the most part, and its condition has severely deteriorated: its plasterwork is chipped off in many places, its walls are cracked, its posterior facade is caving in, and weeds have taken it over. The castle is the object of a lawsuit, as both the return of the castle, and of the school building is being requested by the Protestant Church.