The simple, single-story edifice was built in the late 19th century. Its main facade is determined by three risalits. The middle risalit is located in the symmetry axis of the building and a few steps are leading to the main entrance situated in the centre of the building part with three-axis. The corner risalits have two axis and the paired jack arched windows are surrounded by semicircular plaster decorations. All three risalits are closed by a triangular gable. A few crumbling stone steps are leading from the facade facing the former park to the wooden terrace. The once charming little terrace's elements are rotting, its windows are missing, as are the windows of the building's rare facade. 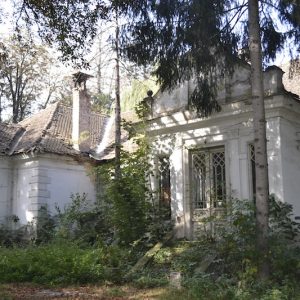 The first and last owner of the castle was Mikes (V.) Zsigmond and then the estate was nationalized. In the period of communism it functioned as a girls correctional facility, then, from 1964 to 1982 as an Agricultural High School. After this period, a private company turned the estate into a pigs farm. According to locals, the pigs have chewed most of the walls, the floor has rotted and the fenestration was destroyed. The castle is in a deplorable state, its tiles are missing, its wood is rotten. The building was reclaimed by the Mikes family's descendants.