The Mikó Castle, constructed in 1827, lies on a uniform elevation in the northern part of the village. Its two forecourts are surrounded by tall walls. The renaissance castle is located to the right of the Olt River, behind the forecourts. 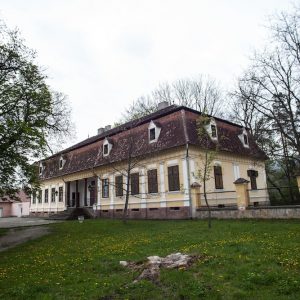 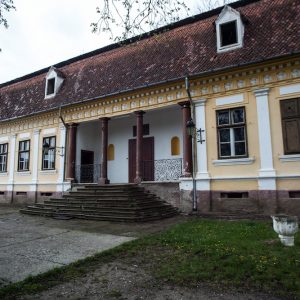 The inscription on its facade reads the following:

"To end the grim wildness

To begin a new openness

To protect his family from hardship

Dedicating it to friendship

In place of today’s listed building once stood the 18th century manor of the Mikó family. The structural walls of the previous building were unearthed in 1970. The archaeological excavation confirmed that the building complex was constructed on the walls of a ancient Roman castrum. According to popular belief, the construction of the castle was commissioned by Earl Mikó Miklós VI, and was built using the stones obtained from demolishing the Herecz fortress nearby. The date of the construction works and the memory of the magnate are preserved by a memorial plaque located in the columned ante-chamber, above the main entrance. After the building was finished, the rooms were decorated with frescos during the 1840’s. It is commonly held that these are the work of Bodor Péter, a jack of all trades artist from Marosvásárhely/Târgu Mureș.

At the turn of the 20th century, the castle underwent large modifications and modernisations. Some of the most valuable pieces of its interior decorations include the historicising wooden panelling of the hunter’s hall, the integrated cabinets and the doorframes, which are all great artworks of the age. The castle was once presumably surrounded by a fine park, as testified by the building still standing on against the slope on the eastern side. After the death of Mikó Miklós, the castle became the property of the Mikes family of Zabola through the marriage of her daughter, Eszter. The Mikes family made the castle more comfortable, cosier: they constructed bathrooms and introduced heating systems, as well as the swimming pool in the park. After the First World War, the castle was bought by Emil Schmutzler, a Saxon merchant, whose descendants and inheritors living in Germany, Ingeborg Pildner von Steiburg and Georg Emil Schmutzler, later revendicated the estate.

The Mikó Castle from Oltszem/Olteni was constructed at the beginning of the 19th century, in the latest fashion of the classicist style. It is a symmetrically composed listed building, divided along two main segments, featuring a columned anteroom. It has a ground floor and a cellar, as well as a mansard roof which is illuminated by triangular-gabled attic windows.  The wooden-pillared portico from the main facade is flanked by five jack arched windows on either side, which are, in turn, separated by pilasters with Doric capitals. The intercolumniation of the portico is bridged by a wrought iron rail.  The great hall is located in the central part of the building, while the rest of the rooms are located on either side of it, and are arranged double-file. According to Bugár Mészáros Károly, the lord of the Oltszem estate, Mikó Miklós, modelled his castle after the Elysée palace from Paris – the former residence of Napoleon, and built a smaller, Transylvanian version of the palace on his own land.

The castle’s interior decoration, its unitary iconography, as well as its well-preserved fresco collection make it unique in Szeklerland. The frescos can be divided into two categories: the war-inspired images that were painted in the spirit of the “grim wildness”, and the images that invoke an island of peace and serenity, images which illustrate “openness” and “friendship”. The frescos of the great hall depict still life: moments from social life, the men’s living quarters are decorated with scenes from the Napoleonic Wars, and the women’s living quarters are decorated with images of travelling through Europe. It is commonly held that the frescos painted during the 1840’s are the work of Bodor Péter, a jack of all trades artist from Marosvásárhely/Târgu Mureș. Some of the most valuable pieces of its interior decorations include the historicising wooden panelling of the hunter’s hall, the integrated cabinets and the doorframes, which are all great artworks of the age. The intarsiated parquet from the building’s southern flooring remains in its original condition. Two original, colourfully glazed tiled stoves can also be found in that area.

Property status: Private property. The local government of Sepsibodok/Bodoc and Kovászna/Covasna County Council bought the estate from its previous owners in 2014.