The castle was built by Alexandru Mocsonyi landowner at the end of 1860. 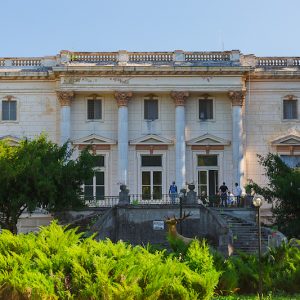 In 1934, the guest of the castle was Patrick Leigh Fermor, who wrote about its hosts, about the entomologist and limerick collector Teleki Jenő and his wife, Mocsonyi Tinka: ”Count Jenő is a member of the one of the oldest Hungarian aristocratic family in Transylvania, a gentleman of the village, who shared with all his heart the general Hungarian grief after the War, although did not express it; Countess Tinka, on the other hand, if there was an occasion, she discreetly took part on the opposite side. Whenever one of them expressed a contradictory opinion, the other would explain the guest in private, that it was rubbish.”