Only the castle still stands from the old building complex. It is a classicist-style building with a rectangular layout. A baroque porch was erected in front of the entrance, along the central axis of the facade. Corner risalits protrude from the edges of both the main facade, and the posterior facade. 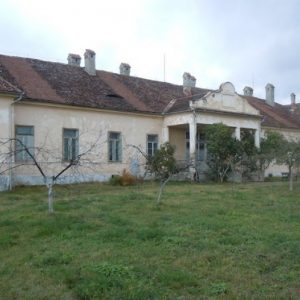 After its nationalisation, the castle’s interior was completely butchered, the stucco ornaments from the ceilings were destroyed and the barrel vaults from the cellar were cemented in. During the 1970’s, the multi-storied gatehouse with a richly decorated facade, as well as the two wings attached to it became the victims of modernisation works.