The castle from Alsófarkadin/General Berthelot was built in the mid-19th century by Nopcsa László III, but the family had probably already had a manor there before that. It is presumably László III that later sold the castle to the Lónyai family. 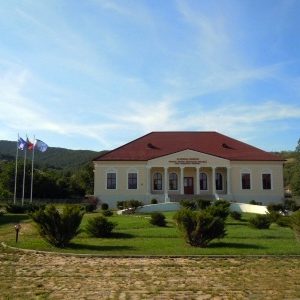 The Nopcsa family is a noble family of Romanian descent from the Hátszeg region. Their first certifiable ancestor was Szilvási Iván (Ioan). By the 18th – 19th century the Nopcsas became one of the most defining noble families of South-Transylvania.

After the First World War the castle and the surrounding estate became the property of the Romanian State, who then bestowed it to the French General Henri Mathis Berthelot in 1922, and renamed the village after him as a recognition of his contributions to the reorganisation of the Romanian military in 1917. Berthelot left the country in 1926 and granted the 70 hectare property and the castle to the Romanian Scientific Academy.

In 1948 it went over to the Ministry of Agriculture, and functioned as an agricultural collective during communism. The Academy managed to revendicated the castle only in 2001, but because of the uncertain property status of the building, it was neglected and its condition severely deteriorated after 1989.

The balustrade on the side of the road leading to the castle originally featured inscribed Roman stones, as well as two massive Roman-age stone lions according to writings. The whereabouts of these stone lions are unknown. The castle was constructed in an elegant, classicist style. Its defining feature is the protruding portico of the main facade, with a tympanum supported by six Ionic columns. Large semi-circular arched windows and jack arched doors open from the walls behind the colonnade. Two jack arched windows with triangular lintels are located on either side of the columned main entrance. The posterior facade is almost identical, the only differences being that the tympanum is missing, and there is only one window on either side of the Ionic columns.

In 2010 the Romanian Scientific Academy managed to restore the already ruined building with the help of funding from the European Union, though some have criticised the restoration works for the use of modern materials and construction methods, due to which the building has lost its former character and vintage aspect.