The Eclectic castle was built around 1872. The two-storey building has an oblong ground plan. Its design was inspired by the medieval knight’s castles, as reflected by the scalloped pediment on its west façade. For several decades, the castle was owned by the Naláczy family, but according to the legend, the Naláczy family had so many debts to the Nopcsa family von Felső-Szilvás that in return, this estate was sequestered by the defamed Baron Nopcsa (III.) László (Fatia Negra - "Black Face") 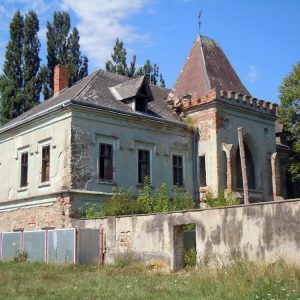 . In 1872, the administration of the property was taken over by the Baron's younger son, (IV) Elek. He was the one who built the castle, moved here and performed modern agricultural works, for example he was the first to bring a threshing machine to Hunedoara County. Elek's first son, the adventurer (V.) Ferenc, whose name is linked to the attempts of becoming a king or spy abroad, thanks to his significant results in the field of paleontology, was considered to be a great scientist. Besides being the one who discovered the fossils of the dinosaur Magyarosaurus dacust, in 1903 he became a member of the Austro-Hungarian espionage services. While working on arming the tribes of Albania, he wrote an ethnography of Albania, in four volumes. In 1923, at the Conference in Trieste, he appeared self-proclaiming heir to the Albanian throne, but this was not accepted by the Great Powers who did not want a Nopcsa family member to take over the throne, nor the Monarchy. In 1916, he finished his mission in Albania, continuing its well-known activity in Romania. Thus, disguised in a nomad shepherd, he established a spy ring. He was unveiled by his supervisor, who was a double agent. At the time of proclamation of the Soviet Republic, Baron Nopcsa hijacked an airplane and left the country.

In 1920, the Geological Institute of Romania proposed him to join them, but the baron rejected this offer and returned to Săcel, where the rebel peasants beat him almost to death. The head wound he obtained at that time was not healed, this being the time when he began to suffer from neurological disorders. Between 1925-1929, Nopcsa Ferenc became the director of the Institute of Geology in Budapest. In 1933 he suffered a severe depression, after which he shot his friend and secretary Bajazid Elmaz Doda. After committing this fact, the baron committed suicide and being no data about his brother, (V.) Elek, it is supposed that all the male descendants of the family disappeared. In 1908, his sister Ilona (1883-1963) became the wife of Count Albert Pallavicini and moved to Italy. The heirs do not request the restitution of the castle. The main façade is defined by a central, bastion-like avant-corps, whose supporting walls and pillars, respectively crenels, refer, as well as the western façade, to historical times. The main entrance is under the arcade on the ground floor, and the arcade from upstairs leads from the porch into the park. On the pyramid roof, located above the avant-corps, there is a dragon-shaped weather vane.  The  main façade contains jack arched windows and above the upstairs windows there are Tudor-style eyebrow arch lintels.The western façade and the octagonal tower has broken arched windows.

Today, the building is deserted, looted, with falling plaster, broken windows and no furniture. The castle is owned by the Hunedoara County Council, and although, not a long time ago, it was used as a special school, today it is no longer in use.