The castle is a single storey building, and along the central axis of its main façade, there was built a massive roof. The arcaded entrance is decorated with four semi-Tuscan columns, and a simple flight of chairs leads to the entrance. Two huge semi-circular windows on both sides surround the semi-circular shaped door, and under each window there is an ornate balustrade. 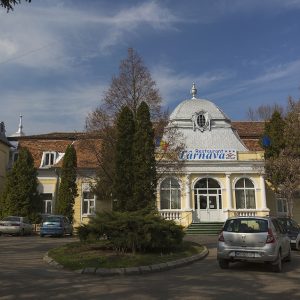 The estate from Târnăveni was donated to Lajos Pekri in 1590 by Prince Zsigmond Báthory. The Pekri family had two branches, one in Târnăveni and in Ozd. They switched estates in 1700, followingly the castle from Târnăveni became the property of the noble branch, and remained in their possession for 250 year. The most influential owner of the castle was Sándor Pekri (1855-1928), who fulfilled several roles in the city’s life: he was the caretaker of the local Roman Catholic Church, director of the Savings Bank, chairman of the Reading Society, founder of the Firefighters’ Club, and the chairman of the National Hungarian Party in Târnava-Mică county.

Above the central cornice of the portico, there was built a parapet, which probably used to host the family’s coat of arms. A disproportionately massive Baroque roof covers the portico. At the western side of the castle there are two two-storey corner towers. The hexagon-shaped towers have simple, straight windows on each of their other sides. Both towers have similar harmonizing Baroque roofs as the one covering the portico. After the nationalization, the castle was transformed into a restaurant. It still has the same function today.