In the former administrators’ building there is a huge safe deposit, which is still intact. Moreover, in some of the castle’s rooms the original floor is still visible, and under the lime layers one can find the original colorful wall painting decorated with golden ornaments. 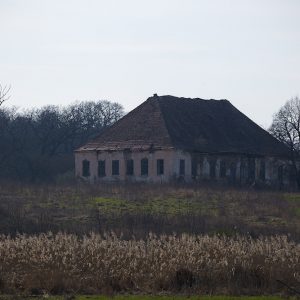 The descendants of the family started a legal process to reclaim the estate, however due to the castle’s severely bad condition, they were only trying to get compensation for the damage caused to the building. The final result of the process is unknown, the only thing we know today is that the ‘Kendi Association’ – the last owner of the castle – would like to sell the estate, and that there are several potential buyers: both from Romanian and Hungarian private investors and companies. Unfortunately, it is very improbable that the Local Council would buy the estate and would use it for the benefit of the local community.

According to a story, in 1940 when Transylvania became part of Hungary again for a short period, and they reestablished the new borders between Romania and Hungary, Chendu Mare was supposed to belong to the Romanian side. It was only because of the fact that Earl Somsics – an influential Hungarian noble – had his castle and home here, that they made an exception and moved the border East to Chendu Mare.