In the summer of 2010, the City Hall of Săcueni signed a contract with the Saint Francis Foundation of Deva, that foresaw the lease of the castle to the Foundation for a period of 49 years, provided that the Foundation renovates and maintains the building in which an orphanage would function. 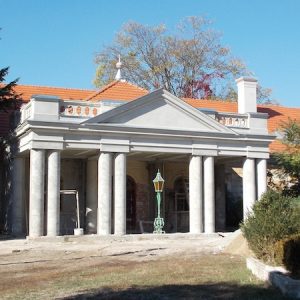 After Transylvania became part of the Hasburgic Empire, the Treasury donated several times the estate to loyal supporters of the king, most of them from Germany. Thus, in 1728, the estate became the property of the imperial and royal counselor, Count Dietrichstein János. Arriving in Săcueni, the young Dietrichstein János arrived moved to the Chancellery, then between 1750 and 1760, on the place of the old Zolyomi castle, he built the western wing of today's castle. With the help of the Austrian head stockman, Dietrichstein re-established the estate and divided it into several households. By marriage, in 1830, the state of Săcueni became the property of Count Stubenberg's family. At that time the castle hosted the offices of civil servants and county executives, since the whole domain was administered from here. For several years, the relationship with the ruler was kept through couriers and letters, but after the death of Count Stubenberg József-Félix, the administration was taken over by József-Fülöp, born in this locality, who founded a developed and modern agriculture, corresponding to that time. The barn was built in the early 1840s. After the Treaty of Trianon, with the introduction of the 1921 Land Reform Law, of the 12,000 acres of Count Stubenberg's estate, 7,000 acres were divided into 280 families, some of which soon became the property of the Romanian State. This is when the relocation of the Romanians from Maramures and the Western Carpathians began, these romanians receiving aid and reductions for the acquisition of land in this area. At the end of the Second World War, the Count's family fled to the West, their domains being nationalized. From 1948 until 1952, the castle was used as a middle school, then as a mixed high school. In 1962 the castle functioned as a higher education unit and then in 1989 it became a high school with instruction in Hungarian language, and with the help of donations from abroad the high school improved its equipment and then became the "Petőfi Sándor" Secondary School (then the ”Petőfi Sándor”Theoretical High School ).

In 1830, the domain became the property of Count Stubenberg Gusztáv. Around 1840, Count Stubenberg built the barn in classicist style, which today is deteriorated, then at the turn of the century, he has restored the old castle, built in Baroque style, construction works being finalised in 1906. This was when the classicist-style portico with columns, located at the entrance, as well as the north-eastern wing was built. The Viennese architect Victor Siedec used the slope of the hill in an amazing way: the main façade of the castle has a single level, no upper floors, but looking from the main road it look like it is a two-storey building. The wings of the castle are in the shape of letter "L". In the middle of the main facade of the west wing, there is an open lobby: the two parts of the portico are decorated with a ionic column. In front of the central avant-corps, decorated with two Doric columns and pilasters, an open portico was built, with four Doric columns, in the middle of its facade being a tympanum, and its corners being closed by a ballustrade-like ornament. The left-side balustrade was destroyed.

The main façade has jack arched windows with straight top and a colored top area. The castle is a single-storey building with a vaulted corridor on the side of the courtyard. The north-eastern wing has eleven axes. Above the central avant-corps, located on the main façade, there is an arched roof. In front of it a small portico has been built, whose jack arched door is made of wrought iron. Above it is the Stubenberg's family coat. The portico is flanked by a column with Ionic capital. The windows are jack arched. On the right side of the main entrance we can see what is left of the old winter garden. The right wing closes in a trapezoidal facade. Above the left facade there is a decorated atic. The rear side façade has two-storeys. Its central avant-corps is divided by two windows on the ground floor, and upstairs is defined by a large, semi-arched window. Upstairs, the edges of the avant-corps are defined by layers of plaster. On the two sides of the central avant-corps, the ground floor contains five axes and the upper floor four axes. All windows are jack arched windows. The upper floor contains plaster decorations. The cornices between them are replaced with stucco decorations. In front of the building there is a wild dendrological park, where the remains of a fountain decorated with an eagle is still visible today.

Ownership: Based on a lease contract, the castle is rented by the Saint Francis Foundation