The castle gained its current form after construction works commissioned by Earl Bethlen Samu, signalled by ornate family crest sculpted from stone, located on the gatehouse, and bearing the following inscription: Comes Samuel Bethlen Coma (comitatus) de Küküllő ac pedis siculialis Marus Capitaneus, atrobique supremus. 1700. – as well as the heraldic bearing plaited in a bay laurel, located on the ceiling of the castle’s largest room, called the Knight’s Chamber or the Council Chamber. 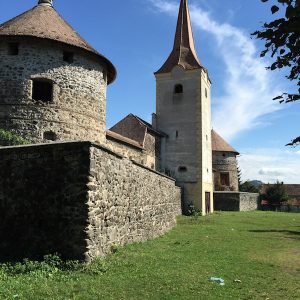 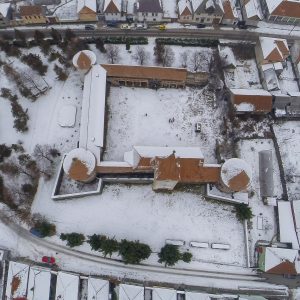 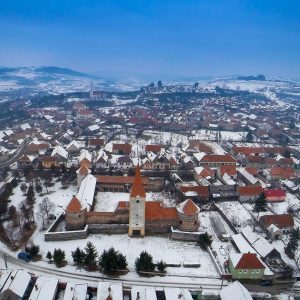 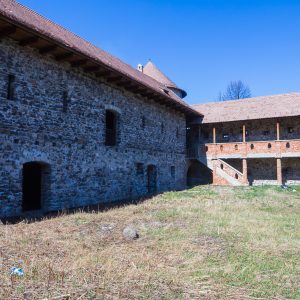 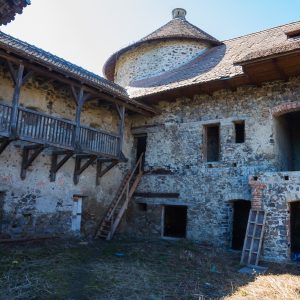 This is a perfect case of how the religious conviction of the castle’s lord has a profound influence on the faith of the serfs. During the time of the Unitarian, Sükösd György, the locals from Rákos were all Unitarian, without exception, and constructed their church in the service of Sükösd; when influenced by the Budai Péter, who was Reformed, most of the family became Reformed as well, and the previously Unitarian church became a Reformed church thereon. When the castle and the belonging lands were inherited by Budai’s Catholic godson, Earl Bethlen Sámuel, the local Catholic Parish gained worshippers as well.

To this day, the villagers mention the old lord of the castle as Bethlen Sámu “the snake keeper”, based on the heraldic bearing of the castle. Its last owner – is said to have been – Earl Teleky Samu, and it is likely that Orbán Balász wrote the following bitter words about him: “... yet the owner of the beautiful castle still abandoned it, and lives in the pestering atmosphere of Vienna, which is hazardous to both lungs and soul”. According to the castle’s current guard, Earl Teleky Samu bought the castle and the belonging forests and lands, a territory of 3000 acres, from the Alsórákos Szekler Commonage for the sum of 420,000 crowns. Today only the aforementioned guard and the caretakers of the bulls housed in the stable still live in the castle, the baronial rooms of which are otherwise empty.

The castle walls enclose a quadratic courtyard, with a round tower at all four corners. Roofed-in premises are joined to this surrounding wall from three sides. From the east, the wide, two-storied baronial residence, the residential rooms of which extend to the round tower, with the main staircase leading to the balcony. The gate tower is located at the centre of the southern wall, as well as a narrower row of rooms (secondary rooms, therefore), that housed the servants of the castle. Angled stairs ensure access to the two sides of the wing. The stable and hay rack are on the ground floor, while the granary is on the upper floor of the western side. Only the northern wall, defended with arrow slits, stands on its own. A ten meter deep well, with good, potable water, is located at the north-western corner of the courtyard. This quadrangle forms the actual castle. The towers are defended by low, exterior walls, protruding in acute angles. Some distance away a second wall, as well as a wide ditch between the wall and the main building provide and additional layer of defence, the only access point being at the gate tower. Another ring of walls once surrounded the castle, of which a few corner towers and a few low sections of walls remain. A part of these walls was demolished when the market-place was extended. The tasteful interiors of the baronial wing constitute a rich historical and artistic collection. The entrance of the ground floor is now walled in, its once elegant appearance being signalled by the low columns and crumbling covered porch, as well as the continuation of this section through wooden (formerly brick) pillars, placed parallel with the building. A straight staircase with a single balustrade leads to the upper floor’s main entrance that opens into the Council Room. The richly decorated woodwork of the door is grouped around two octagonal profiles placed one above the other, surrounded by bay laurels. The edges of the door are carved in an egg-and-dart fashion. Intricate rosettes are located in the middle of the octagons. The carved portions of the door are fixed into the strong board of the door. The doorway stands in a crimson stone frame, the ornamentation of which is in strong contrast with the building’s otherwise simple, relaxed exterior (only the windows of the Council Room have simple tympani).

The building belongs to the late renaissance, and was most likely constructed when the estate belonged to Earl Bethlen Samu. On both sides of the door, pillars standing on foot-stalls support a relatively weak girderage. The aspect of the girder is filled in by the conventional entwined foliage carved into it. The decorations of the ceiling have stood the test of time rather well. Wall has leaked through the roof and caused damage to the historical monument only in recent years. Pieces are already falling off; if action is not taken soon, then the building becomes unsalvageable. The castle’s courtyard has also started falling into ruin. Porches surround the courtyard, and of the eleven Doric columns supporting the porch from the northern wall section, ten have been removed due to fear of collapsing caused by the rotting of the wood and the soaking of the brick. The promise to keep the castle in good condition and preserve it from ruination, signed on the contract between the owner and town, therefore remains just that.