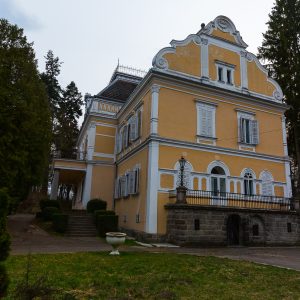 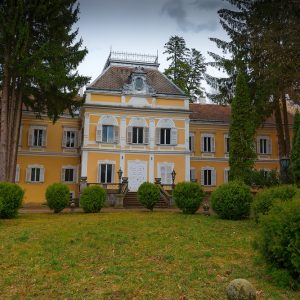 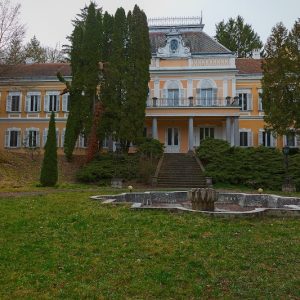 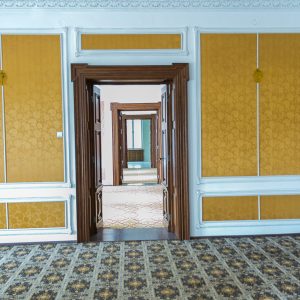 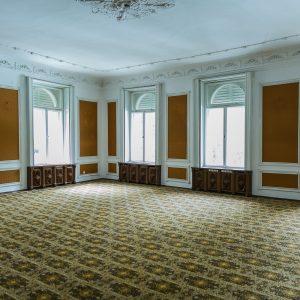 The two-storey castle's main façade from the east, built in Baroque style, is defined by a balcony supported by six pillars. The historical monument contains two wings: the main wing with a ten-axis façade is intersected by a shorter wing. The northern and southern facades of the longer wing end with a gable with spiral lines,on the top of which there is a shell motif. The intersected wing is covered with a mansard roof, which contains a balcony made of wrought iron. The main façade is defined by the balcony supported by six classic pillars, and on the south by architectural ornaments in the Neo-Baroque style.
The northern facade of the castle, facing the garden, has a terrace, delimited by a wrought iron railing, at the edges of which are vases decorated with mythological and biblical scenes. The castle has jack arched windows, except for the windows located upstairs and on the northern facade, which are semi-arched windows. The castle has two staircases, the largest one, located near the intersected wing and the small one, located on the southern end of the castle. Today, the only thing that reminds of the old atmosphere of the castle is the dining room, located on the ground floor. The castle is surrounded by a dendrological park of several hectares. This park contains numerous rare species of trees, such as tulip trees, willows and Fagus sylvatica.  In the park there is also a lake suitable for boat rides, and the participants of the art camps organized in the park have located here some wooden statues.
After 1945, the building was nationalized and functioned as an orphanage, an agricultural engineering school, then housing the headquarter of the Agricultural Cooperative. After 1982, the castle became the possession of the Romanian Communist Party and was used as  a presidential residence. After the regime change, the building was taken over by the Ministry of Culture and until not long ago it hosted the Cultural Center Arcuş.