The Szentkereszty-Bethlen Castle was built by Baron Szentkereszty (II.) Zsigmond (1817-1891) in the second half of the 19th century. The small, single-story building with rectangular ground plan is highlighted by three architectural elements. The first element is the open portico built in the central axis of the main facade. After the nationalization, the castle was used as an elementary school, but today it hosts the school library of  Pavel Dan Theoretical High School. 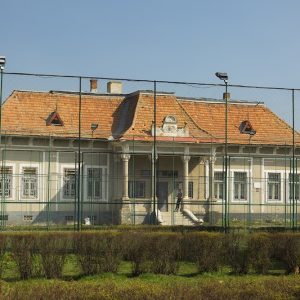 Originally, a beautiful stone balustrade was placed between the coupled columns, but in recent decades, this balustrade was replaced by concrete sills. The frontispiece of the porch contains a damaged relief  of Medusa's head  with a semicircular niche having shell ornaments above. The middle section of the eleven-axis main facade contains a main entrance door and two jack arched windows. The double windows placed on the outer parts of the building have plaster decorations. Originally, window pairs and building corners were highlighted by plasted decorations imitating wall decorations. Once, the Manor had beautiful shuttered windows, but today iron railings are standing in their place.