The original manor house was built at the beginning of the 18th century. However, we do not have many information about that building. The most important owner of the estate was Baron György Szentkereszty (1840-1932). The old manor was rebuilt in the 19th century, and what we see today, it is its form acquired after the reconstructions. 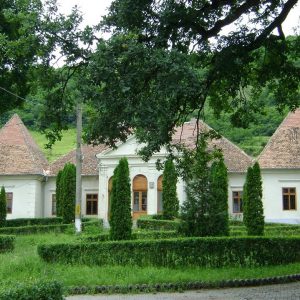 The manor house is a single-storey building, and its main characteristic is its triaxial, risalit-like, closed main entrance at the center of its main façade. Two large, semi-circular windows and the main door are placed between four pilasters. This part of the building is covered with a tympanum. On both sides of the manor house there are two protruding bastion-like buildings both having square ground plans. There are two windows on each side of the building.

After its nationalization, the building hosted the offices of the Local Council. After 1989 Imre Száitz-Jósika laid claim to the manor house, and he obtained the property rights soon after.