Transylvanian chancellor, Teleki Mihály (1634-1690) obtained an estate in the village (established by german speaking people in the age of Árpád) in 1680. There was still no house during this time, but in the 18th century, a few of his grandchildren were living in Posmuș/Paszmos. In place of today's manor stood a few rickety buildings carved from wood. 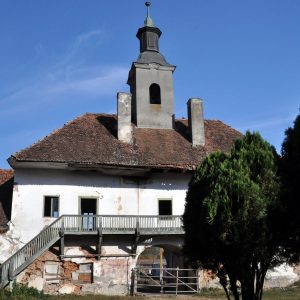 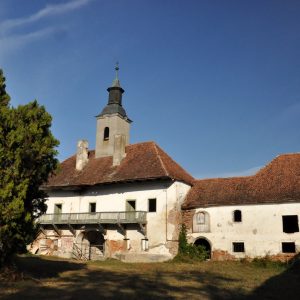 The castle was built in Baroque style by Teleki Pál and Haller Borbála. (The coat of arms of the two families could be seen above the gate of the building until recently. Unfortunately, it has fallen off, and is now being kept in one of the rooms.) They were also the ones to realize the square arrangement of the building: the living quarters from the back were reconstructed around 1750-1752, the first gate tower, built around 1760, and the steadings on two sides enclosed the square courtyard. The structure around the gate, which also housed a chapel, was later used as a living room, then as a guest house.

The complex burned down in 1823. Its restoration, initiated by Teleki Ferenc, lasted until 1830. During the events of the 1848-49 war of independence, the manor was looted and was subject to devastation to such an extent, that Teleki Ferenc was forced to relocate to his estate in Nagysomkút. In 1868, Teleki Andor started making use of the manor once more and repaired the damage done previously. The stables to the left of the main gate were demolished in 1936 and rebuilt a bit further out. The new wing was built according to the plans of Meczner Lajos, an architect from Budapest, in the style of late 17th Baroque, thus confounding many. After 1945, the buildings were nationalized and the state re-purposed them as offices and service living quarters.

A large park and forest once surrounded the manor. Most of the forest was cut down by the new „owners”. Only a few giant oaks remain from the park. Among them also stands a methuselah estimated to be around 500 years old. A school was instituted behind the manor. Besides the residential buildings, the complex is in critical condition today.

The current owner is the local government of Bistrița-Năsăud county. The procedures to return the estate to the Teleki family are ongoing.