In the second half of the 18th century Ugron István and his wife, baroness Anna Bánffy founded the Ugron family branch of Zau de Câmpie, moving to the estate which the baroness inherited. The estate passed from father to son and in 1860 Ugron Sándor (1826-1901) and his wife Rozália Kendeffy of Râu de Mori (1836-1898) became the owners of the estate. 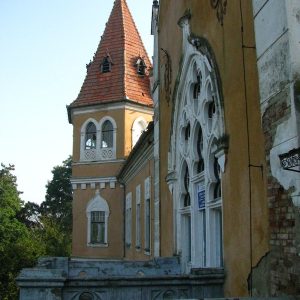 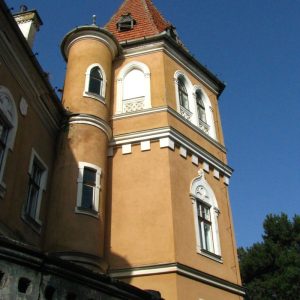 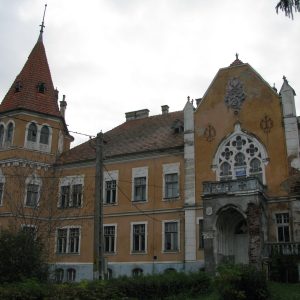 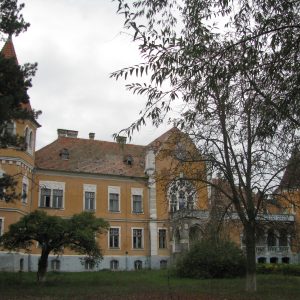 Of their four children, Miklós Ugron (1858-1899) was the first heir of the estate, but after his untimely death the estate passed on to his brother, István, who at that time was the consul of Tbilisi. At the time, the estate of Zau de Câmpie had an old mansion and a guest house made of stone, a park, a family crypt and outbuildings. Nine years after he inherited the property, in 1908 István Ugron initiated the construction of a new castle from Warsaw. István Ugron never married and his reason to build a new castle at such a mature age (46 years) could have been his desire to have a new castle, which would satisfy his needs of comfort and representation of a successful man.

The commemorative plaque located on the front wall of the castle bears an inscription which says that the designer of the castle was himself, Ugron István "éPíTETTE / áBRáNFALVI Ugron Istvan / AUSTRIA Magyarország / ES KöVETE M. R. K. H. MINISZTERE / CS. ES KIR. Kamaras / SóGORáNAK / Baro Losoncz BÁNFFY Janos NAK / Rajz utan / MDCDXI. "(Built by István Ugron of Obrăneşti, Ambassador and Minister of Austria and Hungary, imperial and royal chamberlain, after the drawings of his brother, Baron János Bánffy, 1909). In 1894, Baron János Bánffy (1870-1946) married Rozália Ugron (1874-1953), sister of István Ugron. They moved in Gheja (Mures County) and they perhaps built the castle in the village. Despite the fact that there is no information about the architectural studies of Baron Bánffy, in his letters written in 1908 by " his father-in-low'a castle" it appears that István Ugron had an important role in designing the castle: "I am very glad that the castle project went well, I will visit the boy at the 'midwife' Pákei ". This letter and the plans shows that János Bánffy was the one who developed the concept of the castle, with the approval of István Ugron, and their design has been transposed into a feasible form by architect Lajos Pákei from Cluj (1853-1921). The architect had to work on the design and budget that were fixed in advance, which limited the freedom of his architectural invention.

The first projects of the castle from Zau were several drafts drawn with pencil by the amateur architect (János Bánffy), upon which István Ugron made notes and corrections. In these drawings, architect Pákei made some necessary corrections, especially in terms of achieving terraces and a central hall, then early in 1908 he drafted the final construction plan. Since the partners had a firm design in terms of the planimetry of the castle, it is assumed that the architecture of the castle from Zau, its gothic style is thanks to them, because other castles designed by Pákei had a neo-Renaissance (castle Beldi from Budila,  the Bornemissza Castle from Chinari) and eclectic (the Teleki Castle from Satulung and the Bánffy Castle from Sâncrai) styles.

The castle has an L shape and a 50 meters long wing with two rows of rooms and only one perpendicular wing with a row of rooms. The basement is planimetry-like. At three quarters of the castle towers we can observe various shapes and sizes, and the facade terraces containing various forms as well. Compared to the original conception of János Bánffy, the architect Pakei Lajos tried to design a more elegant appearance for the terraces and porches. The result was a mainly asymmetrical facade. The main entrance, located on the ground floor is preceded by a broken-arched portico, and above the porch there is a terrace, which is accessed through a large arc accolade. Above the arch we can observe a carved Ugron family coats of arm. On the left wing of the portico there is a four-axis wing with Gothic windows, on the corner there is a two-story hexagonal tower. The right wing has only one floor preceded by an arcaded porch. At this corner there is a circular tower. The terrace with a simple parapet and small windows above the porch are less in Gothic in appearance as the facade. Initially, in front of the south facade with one level and articulated with seven axes, there was planned to be a winter garden, but instead Pakei realized a terrace with crenelated parapet. At the intersection of the two wings there are two short symmetrical porches. At the end of the porch there is an entrance. In the center of the facade there is a body with three axes and a gable-like façade.

Downstairs, the central representative element is a large hall including the main staircase. Around the hall there are the former representative rooms of the castle, to the left, there is an oriental lounge, another salon, a dining room with similar dimensions as the oriental, and another lounge. Behind the central hall a buffet and the lobby lounge were designed, after which a series of rooms including the round tower room. The octagonal hall of the shorter wing had a breakfast room and sleeping quarters. The floor was only partially built, the plans included guestrooms, guest lounge and a teacher's room.

István Ugron was one of the most important collectors of that era in Transylvania, with an impressive collection of works of contemporary painters from Poland, Serbia and the Orient, but also precious art objects (Persian, Anatolian, Chinese). These works and collection of weapons and furniture were lost over time. The Castle from Zau de Campie, built between 1908 and 1912 is one of the late historicist castles, in our case combining the Gothic and Neo-Roman styles. Regarding the planimetry and its organization, the castle fully meets the rules of the Hungarian Association of Engineers and Architects from 1907, which attempted to formulate the rules of the ideal castle at that time.

After the nationalization, the valuables were taken by officials. Until 1954, the castle functioned as a grain collection center, between 1954-1959 it functioned as a school and between 1959-1962 as an economic high school. Since 1963 the castle housed a children's home, which was liquidated in 2012. The future of the castle now owned by the County Council is uncertain, its future function is still not known.