The manor was fortified during the second half of the 16th century, as evidenced by written sources from 1567 mentioning the building as a castellum. The renaissance reconstruction of the fortified castle – from which parts of today’s building originate as well – is attributed to Báthori István, the grandnephew of Transylvanian Prince and Polish King Báthori István (they had the same name). 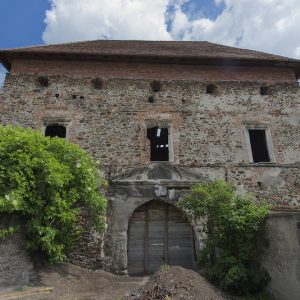 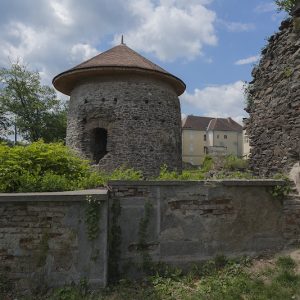 Báthori Miklós lived in the 15th century, and established the family’s Somló-branch partly because he inherited several Bánffy properties from his mother’s side, both in Crasna and in Cluj Counties. By the second half of the 15th century, the fortress from Várhegy had most likely been abandoned; – the last written mention of the building originates from 1435 – that is probably why Miklós needed a new residence. That is how the aristocratic manor serving as residence for Miklós, situated in the middle of the country town Șimleu Silvaniei, came to be. That manor was predecessor of today’s ruined castle. The only remaining text mentioning the manor from the town was written in 1520.

In 1582, Báthori István the Younger started paying stonemasons and bricklayers to come from Cluj-Napoca to Șimleu Silvaniei to work; he later had window, door and fireplace frames, sculpted by stonemasons in Cluj-Napoca, transported to Șimleu Silvaniei in 1592. The gate’s inscription, which has since become illegible, once contained the year number 1592 as well, above the family crests of the Báthori and Bebek families. In 1594, Zsigmond accuses his cousin of disloyalty and strips him of his property, thus the castle became the responsibility of the treasury. The family regains ownership of the Șimleu Silvaniei estate only during the short reign of Prince Báthori András: the castle became the residence of Báthori István the Younger’s son, András, and his wife Anna. Șimleu Silvanieidoes not become an important strategic centre for warfare, and even lost its purpose of guaranteeing territorial control after Oradea was reconquered in 1690. After losing both its inhabitants and its purpose, the castle’s condition quickly deteriorated, and the Kuruc-Labanc conflict only accelerated its ruination.

The ditch surrounding the fortress was filled in at the beginning of the 19th century. Most of the exterior fortress was built-in during this time as well. The castle is located in the middle of the city; of its northern side, only the exterior gate and a long wall-section attached to it remain. On the southern side two round towers remain of the interior building, as well as four rectangular towers from the exterior fortress. Because of the extended damage suffered by Báthori István’s renaissance castle over the years, we only have a complete image of it based on a land-surveying from 1687 and the buildings inventory. We have even less information about the period before that: the restricted salvaging excavations did not prove useful in this regard.