The Brașov Fortress is located on a hill, 64 m above the city of Brașov, at 651 m above sea level. The hill's eastern side belongs to Old Brașov and its western side to Bolonya. The Fortress was built in wood in 1524 and it contained a semi-circle tower surrounded by a wall. In 1529, Petru Rareș the Moldavian vajda who supported king John conquered and demolished the citadel of Brasov that took king Ferdinand's side. 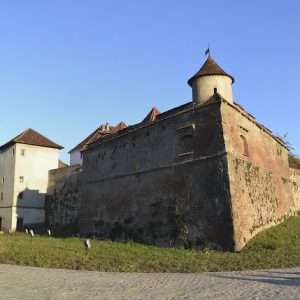 Between 1945 and 1954 the building functioned as a prison, than in 1975 it was used as a warehouse for archives. The fortress was renovated in the period between 1975-1981. Today, the medieval castle houses a restaurant and an arms exhibition. The hillside is covered with forest park, which is crossed by walkways.