The castle has a second wall in front of its south-eastern wall. The entire building is surrounded by a water-filled moat (circa 15 m wide, 4 m deep). The original entrance of the castle was situated on the north-eastern side, ruined today. 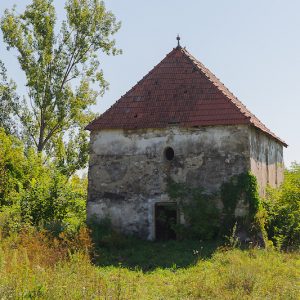 Opposite to this side, on the middle of the south-eastern wall of the castle lies a rectangular structure (10 x 7 m), which functioned as a Reformed Church. Each side of the castle, except from the north-western side, contains a couple of narrow windows. The entrance is on the north-western side and a circle window is standing above it. The castle lies in the inner part of the village, on the hill outstanding from the swampy terrain of the region. Since the Middle Ages, the locality of Stremț (Diód) belongs to Alba County.