The fortress was first attested in 1456, but most probably it dates from the 14th century. The history of the building is closely related to the locality of Făgăraş, first mentioned in 1428. The fortress of Făgăraş was one of the largest in the province, and the history of the region was linked to this fortress that dominated the surroundings. 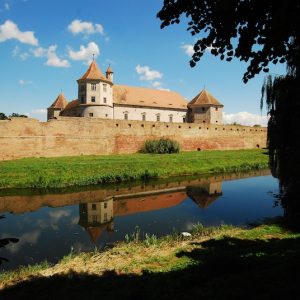 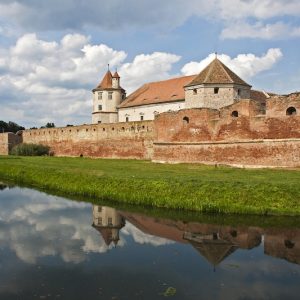 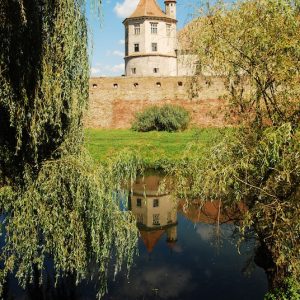 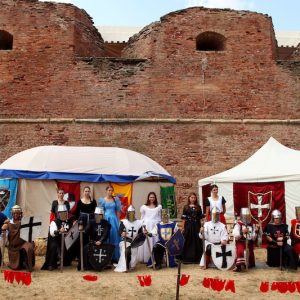 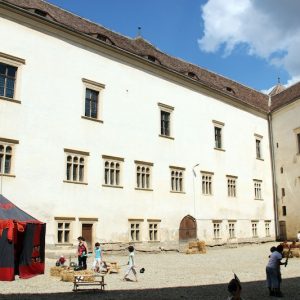 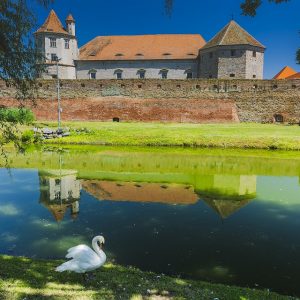 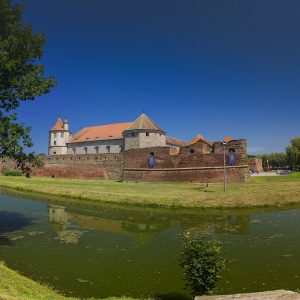 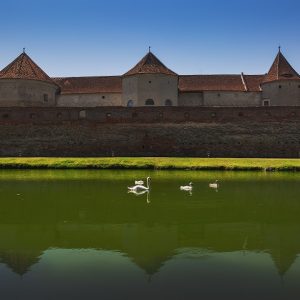 In 1368, the foretress was offered to the ruler Vlaicu of Muntenia. From this date, for hundreds of years, the voivodes of Wallachia received the title of ”Duke of Făgăraș and Almaș". From the XVIth century, twelve documents of Mircea cel Bătrân (Mircea the Elder), associated with the Făgăraș region, were preserved.

Also from this region dates a document of Vlad Dracul (Vlad the Impaler) from 1436. In 1452, Vladislav II had to resist as the third part of Dejani and three mountains were donated to the boyar Stanciu Mailat, but it seems that in 1455 Făgăraș was owned by the Prince Iancu de Hunedoara (Ioan of Hunedoara), then in 1456 it was under the reign of Vlad Ţepeş. In 1464, for the services rendered to the family of King Matthew, the fortress was donated to Geréb János de Vingárt, but in 1467 the king changed his mind and took over the fortress to give it in case of necessity to the voivodes of Wallachia and Moldova. In the following years, most probably, the fortress was owned by the voivodes of Wallachia (1474 by Radu cel Frumos (Radu the Handsome), in 1475 by Vlad Țepeș(Vlad the Impaler)), but in 1478 King Matthew offered the fortress to the exiled boyar, Udrişte, and the fortress remained in its possession until 1483. After this date, the fortress came into the possession of the University of Săcești, and then, when Ladislaus II decided that the fortress should belong to Ioan Corvin, as the heir of the Hunedoara family, the Saxons opposed. After the death of Ioan Corvin, in 1505 the fortress was donated to Ioan Bornemisza. In 1506 he named the first captain of the fortress, Tomori Pál, later the archbishop of Kalocsa and general commander of the Hungarian army in the battle of Mohács.

After the death of Bornemisza, the fortress was returned to  Ioan Szapolyai. In 1527, the other king of the time, King Ferdinand offered the Land of Făgăraș to Stefan Mailat, who in order to fulfill his dream of becoming the Prince of Transylvania alternated allies. He fortified the castle, building a new defensive wall, called the Chair of Făgăraş his own seat, and here was where he set up his chancellery, and in 1541 here was where the General Assembly was held. In 1566, his heir, Gabor Mailat, sold the estate to Ioan Sigismund, who in his turn donated the estate to Bekes Gáspár. In 1573, the fortress came into the possession of Andrei Bathori, the husband of Mailat Margit. From him, the fortress was inherited by Ștefan Bathori(Stephen Báthory) and then by Baltazar Bathori. In 1595, Sigismund Bathori gave the castle to his wife, Maria Cristierna. In 1599 Maria Cristierna renounces the fortress in favor of a lease agreement, but received her money only in the first half of the first year.

Mihai Viteazul (Michael the Brave) was the first, who during his short reign, established his royal seat in Făgăraș. After his death, Lady Stanca was to become a prisoner between the walls of the fortress. The fortress became the possession of Csáky István, who after one year gave it up in exchange for the castle in Nagykálló, so the fortress came into the posession of General Basta, who made a garrison occupied by hundreds of people, and appointed Michael's murderer, Jacques Beaury, as captain. On July 9, 1605, the fortress was handed over to Bocskai István. From 1615, Făgăraş becomes a tax domain which in 1628 becomes the property of the wife of the Prince of Transylvania (first Catherine of Brandenburg, then Suzana Lorantfi, followed by Anna Bornemissza). On May 13, 1688, Mihail Apafi I was ratified. After the death of Mihail Apafi II, from 1689, the fortress became the possession of the Austrian crown. Between the years of 1738 and 1765, Făgăraș became the property of Chancellor Gabriel Bethlen, after which it was donated to the Saxon University for 99 years. After that, Făgăraș came into the possession of the Hungarian state, then of the Romanian state, but in the period of 1715-1960, the fortress itself was used as a prison. In the 1950s, 165 political prisoners died in the fortress. The building consists of a trapezoidal site with a corner tower and three floors, a bastion enclosure and an outward tower. The corner towers of the inner areas are polygonal, with casemates placed in them. Among them, the so-called Red Bastion has 5 floors. The building's structure has not changed much since the 17th century, its former aspect being revealed in details in the preserved documents. The entrance to the fortress was made through the eastern side, through a wooden bridge. The 6-meter defensive ditch was paved with stone since 1637, this being linked to the Olt River. Later, this trench was filled with the water of a lake that does not exist today. Swans were kept on these waters, whose feeding with fish was paid from the fortress's budget. The exterior walls, except the ones on the eastern side, are 6-8 meters tall, and today they are doubled from inside and the spaces created  between was filled with earth. The eastern wall is only four meters wide. In 1630, the main entrance of the outside fortress was fortified by a barrier, instead of which, in 1656 there was built a gate with two wings, containing a small door and a shingle roof. The entrance of the gate tower, located on the eastern side of the inner fortress, was preceded by a movable bridge. The upper-floor of the housed the advisers of the tower. The exterior fortress includes the bastions of Báthori, Doboló at the south-eastern corner, the Szabó János bastion at southwest, and the Csatornyás bastion to the northwest (with the inscription of the year 1625, its fountain being attested for the first time in 1766). On the north-eastern corner, the Italian-style bastion, called the Bethlen Bastion, later became the Bastionul Cuptorului (the Oven Bastion) (because in 1623 there were three ovens functioning in it). There were two mortars in the rooms. On the northern side of the external fortress, on the first level there were the houses of the staff, the upper floor being used as a grain deposit. To the south there were the kitchen's rooms. During the time of Gabriel Bethlen the fortress had three kitchens, one Hungarian and two German, of the last two, one became the ruler's wife's. To the north of the fortress, on the outside of the ditch, there was the Husars' Fortress, which had a U-shaped ground plan. This fortress had stables and a blacksmith's workshop, and in the middle of the courtyard there was a fountain. This part was connected to the fortress by a wooden bridge. This fortress does not appear in the inventory of 1676, but in the plan of 1691 it is referred to as the "stables in ruins".

Initially the facades of the inner castle were painted. Hence the name of the bastion towers, the Red Tower, the Pestriţ (Patchy)Tower and the Black Tower. From the painting, the white-red ornament in the vicinity of the Pestriț ​​Tower, located above the first floor of the northern wing, was preserved. In 1637 the fortress was covered with tile, on the south side with shingle.
There were small rooms between the outer wall and the chambers. These rooms served for feeding the fireplaces. The courtyard of the fortress was paved with stone and there was a stone fountain in this courtyard, which had two buckets and a brass pulley. The most attractive part of the fortress is the Renaissance loggia (late period) of the southern wing. It dates back to the time of Baltazar Bathory, a fact underlined by the Bathory family's coat of arms When the number of members of the Diet increased, the assemblies were held in the largest room of the fortress, in the Throne Hall, located upstairs. The Red Tower, located in the south-north, is the tallest tower. This tower has a circular base, but the last two floors became polygonal. In 1632 this tower was called "golden deposit", most likely because it had a golden colour. Until the middle of the 17th century, the tower had one, but most likely two staircases. One contained several rounds, this was not preserved after 1656, and the other was a spiral staircase and, according to the inventory of 1632, it opened behind a secret door (this was also demolished). In 1767, a horologe functioned in the tower. This was covered by a globe of golden brass and a cock-shaped weathervane. Only one part of the stucco decoration was preserved, this being located at the third level.
In 1632, Catherine of Brandenburg (who often sat in the fortress) lived on the first floor of the northern wing, above her, on the second floor, being the quarters of her husband Gabriel Bethlen. Most likely, here was where foreign craftsmen made the first stucco decorations in Transylvania. In 1632 Suzana Lorantfi lived on the first floor of the western-side wing and had access to the courtyard through a ladder that has not been preserved today. Her son, Gheorghe Rákóczi II, lived on the second floor of the western wing, in the former suite of Gabriel Bethlen. Gheorghe Rákóczi II spent his honeymoon here with Zsófia Báthory, who on April 5, 1643, went to Catholicism. The rooms were divided by wooden walls. The chapel of the fortress was made out of three rooms. Here was where the general meetings were held, until Mihai Apafi did not raise the number of the Diet. From 1700 it was a Catholic rite, then from 1919 Orthodox. In 1934, an exterior entrance was established. After the restoration of 1970, the fortress was renewed according to the style of the 17th century, except that its round windows were changed with square ones.