The old mansion was built in the late 16th century and at the beginning of the 17th century, presumably due to the order of Miklós Apafi or his son, György Apafi (royal councilor). 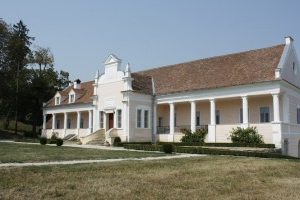 „It seems that during the construction in the building which was adjusted to the axis of the porch and kitchen, there was a dining room and the lord’s lodging by the right side of the porch, along the gate entrance of the lot and the protection wall of the neighboring Lutheran Church, which was patronized by the owners. The house of women and girls, through which stairs were leading in the direction of the flower garden, could be found on the other side. One could reach the porch situated right in the central axis of the frontage through a sloping wooden bridge, which was a unique feature of the Transylvanian antiquity.” - András Kovács, Late Renaissance Transylvanian Architecture. The wooden bridge was connected to the mansion house with a hoist bridge, which could be drawn up to the towers made from the building’s main axis.

The mansion was rebuilt several times, first by Petki Borbála (György Apafi’s widow) in 1651. She expanded it into a castle, right before his son, Mihály Apafi became Prince of Transylvania. Three vaulted halls were built to it and the building was no longer symmetrical. Its length exceeded 40 meters and its width was more than 17 meters together with the tower-like lavatory pairs. After the death of Mihály Apafi, Prince of Transylvania, the estate remained in Mâlâncrav, however it was not visited frequently by the family. Until 1772 the manor was in the possession of Kata Bethlen but then she ceded it to the treasury. At the beginning of the 19th century (when the estate was in the possession of the Bethlen family again) new changes were implemented because Pál Bethlen rebuilt the building in the style of classical architecture. In 1848 Romanian rebels destroyed it, but it was rebuilt again. The Bethlen family donated everything to the Szentkereszty family (supposedly together with the estate in Kisbún) but they sold it to a bourgeois family in the first half of the 20th century. Between 1908 and 1920 the building undergone two major transformations. After 1920 the new owner of the manor was the Lutheran Church and it functioned as the community center of the village. An ample process of recovery started in 2002 and it was finished by 2007, therefore the decayed building with its beautiful columns was restored in 5 years.

Ownership: It was bought by the Mihai Eminescu Trust Foundation, which is patronized by Charles, Prince of Wales.