Until the 1990’s the mansion was the property of the Forró family, but then the Dutch Sieste van der Laan purchased it from them. The new owner assigned Tüdős S. Kinga to research the history of the building and planned to recondition it. 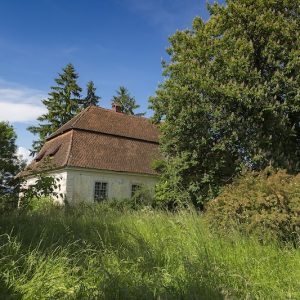 After the stylistic analysis of a fragmentary text found over the entrance to the dining room, it was discovered that the mansion was built in the 18th century. The building had undergone several changes. The first major transformation happened in the 19th century, after the marriage of Rozális Babós and Farkas Forró. To explore the full history of the building further researh is still needed. The mansion has double roof and it is situated along the banks of the artificial Besenyői river in a rectangular shape and classicist style. On the facade plaster decorations are displayed: cornice runs along the eaves; the frame of the windows and the decorative plaster imitates the ashlar masonry of corners. Around the plot there was once a massive stone fence but nowadays one can find only the traces of it. The front porch was built post factum. Presumably the building had a porch on the back side as well.

The building is two-rowed: the main dining room and two halls can be found in the front row, with a view to the garden, while the second row includes the kitchen, the chambers and the back entrance.