The freestanding, single-storey building has an L-shaped ground plan. The centre of the main facade contains a portico with gable roof, supported by two square columns and four columns with plinth and capital. Its trapezoidal tympanum is defined by four smaller rectangular airshafts. 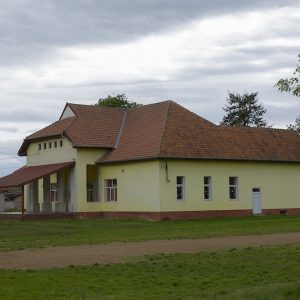 Near the main entrance there are two narrow windows and on the two sides of the portico, one large, converted window. The left side of the rear facade is the longer part of the L and contains a room with three windows. On the middle and on the right side there is a protruding avant-corps, the middle risalit contains the entrance from the courtyard side, with two narrow widows on each side. The wall section between the avant-corps is broken by one large, converted window. The building is double tracked and the old rooms, today's classrooms, open from the lobby.