„1774 G. B. M.”  – can be read on the stone plaque above the mansion’s entrance. The mansion was inhabited by the Bánffy family until close to the Austro-Hungarian Compromise of 1867. It then became the property of general Wilburg Aladár, who used the building as barracks. In the middle of the last century, the building hosted the local council, later on the collective. 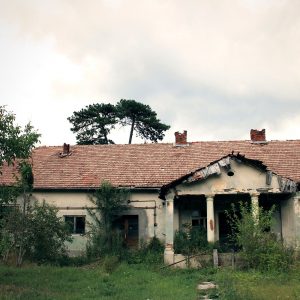 Although most of its fenestration has been replaced during that time, the old windows next to the main entrance, as well as their elegant locking mechanisms, reminiscent of butterflies, still remain. After the departure of the Bánffy family, the mansion was first given over to general Wilburg Aladár, who repurposed it as barracks, but later died in the war. The mansion then served as courthouse, mayor’s office, local council building, as well as quarters for the collective, but it has not been used for a while now. Nature has taken over the yard, the main stairs have become difficult to access, the building’s roofing has caved in. The buildings of the servants’ quarters that once belonged to the mansion can still be seen on the neighbouring lot.